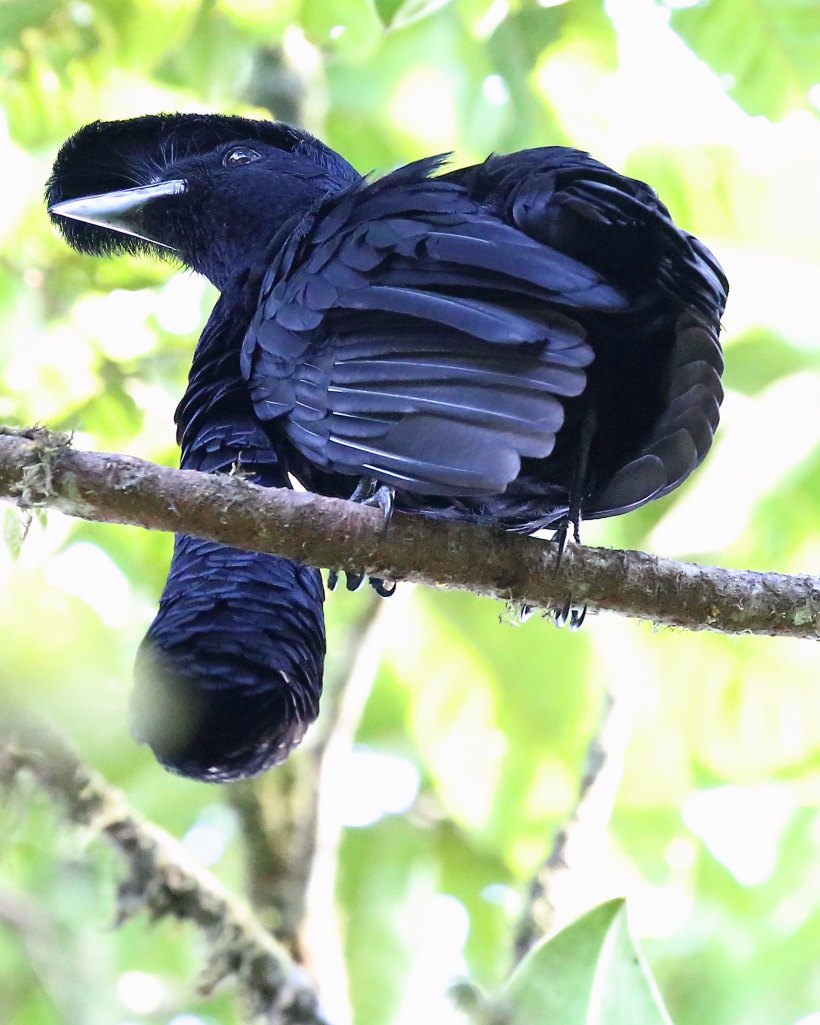 Named after its head crest, the umbrellabird looks like an Elvis crow with a draught excluder dangling from its neck. Stop smirking.

There are three species all together – the Amazonian (Cephalopterus ornatus), long-wattled (C. penduliger) and bare-necked (C. glabricollis) – and they make their home in the rainforests and lowlands of Central and South America.

If they’re not feeding or showing off, they’re pretty still and solitary, and snack on seeds, fruit, insects and the occasional lizard. Males spend the breeding season in “leks”, where they display and jostle for female attention, and the lucky lady gets to spend the rest of the year looking after the result.

Somewhat conveniently – and depressingly – they also represent three of IUCN’s main endangered species statuses. And even though I’m going to start with the “happiest”, Least Concern, I still came across an unfortunate story about the Amazonian.

This time it’s courtesy of British naturalist Alfred Russel Wallace, who almost beat Darwin to the punch on the theory of evolution. He was kind enough to pen some thoughts on the Amazonian umbrellabird, seeing as he had just shipped some back to England, and also had a “fine male” he kept alive for ten days. 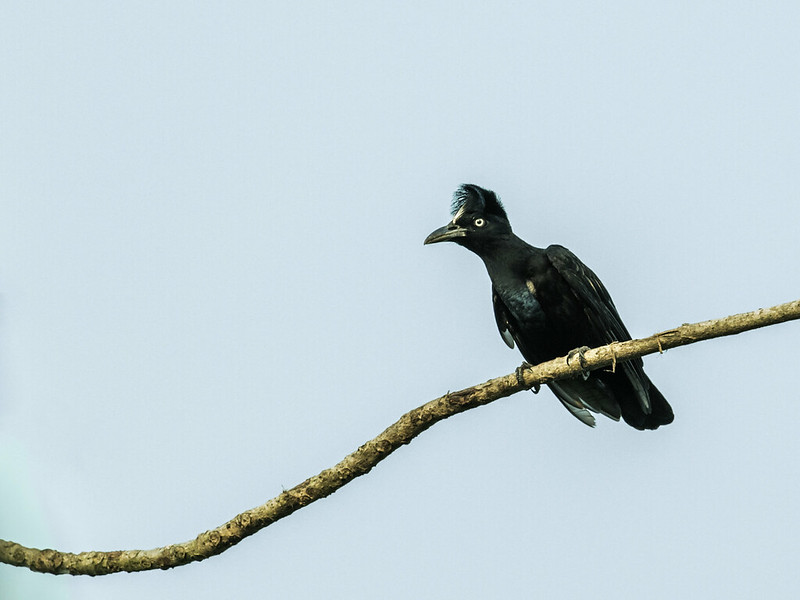 This one looks equally intrigued and concerned. Photo by Nick Athanas.

He observed that this sheeny blue-black bird had a dangly, 10 cm (4-inch) “wattle” of skin and feathers hanging from its chest, which it could retract while flying if needed. The bird also had a habit of regurgitating seeds about an hour after beak-bashing and then eating fruit. When sleeping, it devolved into a floof of black feathers, with neither its feet nor head visible due to its wings and head crest.

It devolved into a cold and still body after the tenth day, and when Wallace examined its head, he realised “the shot had broken his skull and entered his brain”. What shot? The one from ten days earlier, apparently, when the bird was first caught. But don’t worry, because he “appeared to suffer no ill effects from it” until he dropped dead off his perch.

A less depressing note from Wallace states that the local name for the bird, Ueramimbé, means “piper-bird”, after the males’ loud and booming calls. They need something to cut through all the shrieking, cheeping and squawking of the Amazon basin, after all.

But what about its cohort with the equally literal name, the long-wattled?

Its bigger wattle is clearly making up for something, because it’s smaller than the Amazonian. 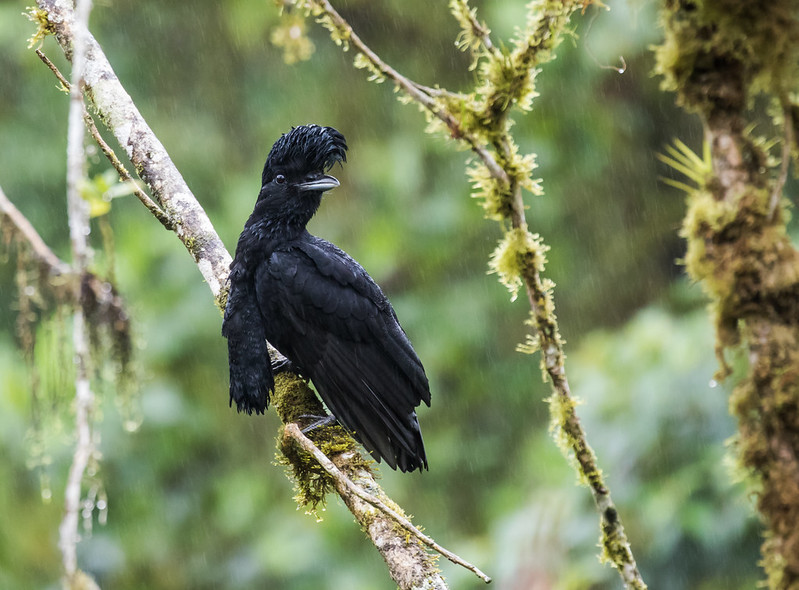 He looks pretty proud of it too. Photo by Nick Athanas.

Listed as Vulnerable by the IUCN, the long-wattled makes its home along a strip of coastal forest in Colombia and Ecuador. Due to the males booming like a lost cow, it’s known locally in the latter as the pajaro toro, or “bull-bird”, and their wattles are more than twice the length of the Amazonian’s, at 20-25 cm (8-10 inches).  It’s still just retractable skin and feathers, however, despite the investigations of another 19th century British zoologist, Louis Fraser:

The appendage to the throat had not any opening to view ; nor could one be found by blowing into the mouth or nostrils.

It’s useful when it comes to bird-on-bird intimacy, however.

Female umbrellabirds are pretty aloof, visiting a male lek just once a year to help brew an egg, and they may visit multiple males over a few days before deciding on “the one”.

If she likes him, she will perch close to him, and once he lays his long wattle over her back, all bets are off. After a few seconds of him awkwardly hovering by her back, she’ll fly off, and likely never see him again.  But him waiting for the next amorous female – until he’s exhausted enough to fall off his branch – isn’t the only way he sows his seeds.

Karubian et al. found, bizarrely, that the fruit seeds regurgitated by male long-wattled umbrellabirds were more widely dispersed, even though they spent a chunk of their time in the same lek waiting for love. While the females coughed up seeds more evenly across their range, said range was smaller, and males were often flying in from afar – where they first downed the fruit – to find a spot in a lek.

This might not sound like a big deal, but seed dispersal is a handy past-time if you really like tropical rainforests and want to keep living in one.

Then again, part of the Endangered bare-necked umbrellabird’s problem is when it doesn’t live in a protected rainforest.

For those of you who’ve already heard of an umbrellabird in passing, this is probably the one that springs to mind. 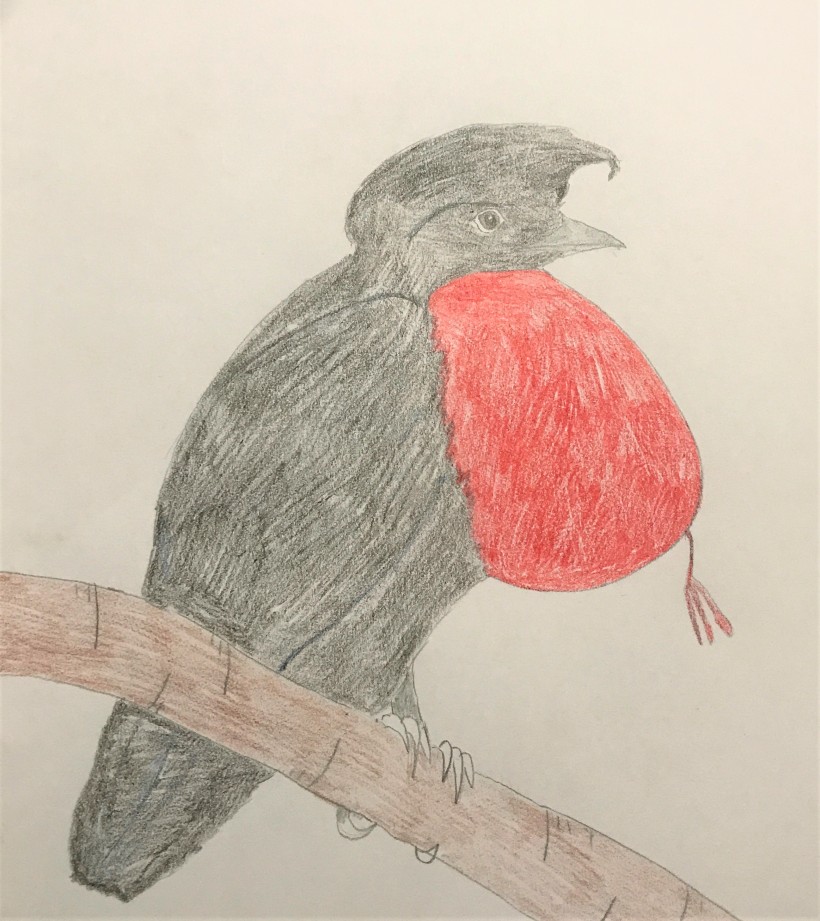 Native to Costa Rica, Panama, and parts of southern Nicaragua, the bare-necked umbrellabird can usually be found where the fruits are a-blooming, up to 2,100m (6,889 ft) elevation, and in lowland forest when not looking for love. That’s also rather apt, because when the male is feeling amorous, his throat looks just like a fruit.

His wattle is bare skin and bright red, and also inflatable. He will of course use it to woo the ladies, puffing it out before rearing back and “hiccupping” after a good booming, both before and after dawn.

He might also pause to try to shove other males off their perches, or engage in side-to-side frenzied hopping. The females are just as discerning as the other species, and look like smaller, browner crows with their own bare, red patches of skin either side of the neck. They’re even more aloof, because to date we’ve only ever found one nest.

Discovered in 1988, it was a bulky mess of sticks in the fork of a tree about 5 metres (16 ft) up, but despite its size, it only held one egg. This put the kibosh on an idea that the bare-necked umbrellabird, for all its ostentaciousness, kept its nests low-key to avoid the attention of monkeys and other egg thieves, but this clearly wasn’t the case when it was so hefty-looking.

Also, just one egg didn’t make sense either, because food seemed pretty abundant, so why not raise an entire brood? Perhaps we’ll know more when we find another one. But guess what – this is an exotic, tropical bird that doesn’t have numerous babies, so chances of that happening are getting slimmer and slimmer.

Although the bare-necked umbrellabird lives in a protected rainforest area throughout breeding season, it’s its off-season lowland forests that are in more trouble. By the early 1990s, Costa Rica had lost about 32% of this kind of terrain, and uprooting trees for timber, or banana and palm oil plantations, isn’t exactly helping. So it’s going to need shelter from more than just rain!

We would expect the name “umbrellabird” to cover several different species, so here’s hoping we can keep it that way. And that they continue and increase all their booming. 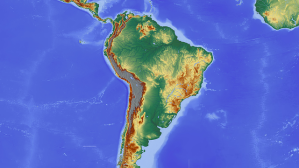 What? Black, crow-like tropical bird with floofy head crest. The males also have a long “wattle” dangling from their chests, and the bare-necked’s is both bright red and inflatable.

Where? The rainforests and lowlands of Central and South America. The Amazonian is found pretty much throughout the Amazon basin; the long-wattled in Colombia and Ecuador; and the bare-necked in Costa Rica, Panama, and parts of southern Nicaragua.

Endangered? The Amazonian is Least Concern, the long wattled is considered Vulnerable, and the bare-necked is Endangered. All three are at risk from habitat loss due to logging, banana and palm oil plantations, or are hunted for meat or the pet trade.

Probable motto: You’re not the only species obsessed with breeding.

They look awesome. Do they need my help at all?

Yes. Although I couldn’t find any specific umbrellabird campaigns, their homes are being cleared or burned and could use some love:

4 thoughts on “The Umbrellabird Has Concerns Other Than the Rain”