A dinosaur-unicorn? I think the awesom-eter just went through the roof.

The hefty, 12 metre (39 ft) long plant-eater Tsintaosaurus (ching-dow-sore-us) was described by its discoverer, Yang Zhongjian, as having an odd, forked and forward-facing head spike. And that was weird in an already weird family of dinosaurs.

Imagine a group of giant reptiles with duck faces, and you have the hadrosaurs.

Shockingly, not their true colours. Image by Сергей Иванов

Many, but not all, had crests, and the theories about what they were for could be just as bizarre.

A snorkel, anyone? Or how about an air storage unit, or air lock to stop water flooding their lungs while they browsed aquatic plants? My favourite though has to be the “branch deflector”, for when they walked or ran through dense woods.

These theories have since been deflated, and there was even less chance of the latter applying to Tsintao, since its “spike” would have been far too brittle to withstand a hefty thwack of wood. And as the theories have changed over time, so has Tsintao’s crest. In effect, it’s lost its enchanted, skyward-pointing alicorn. 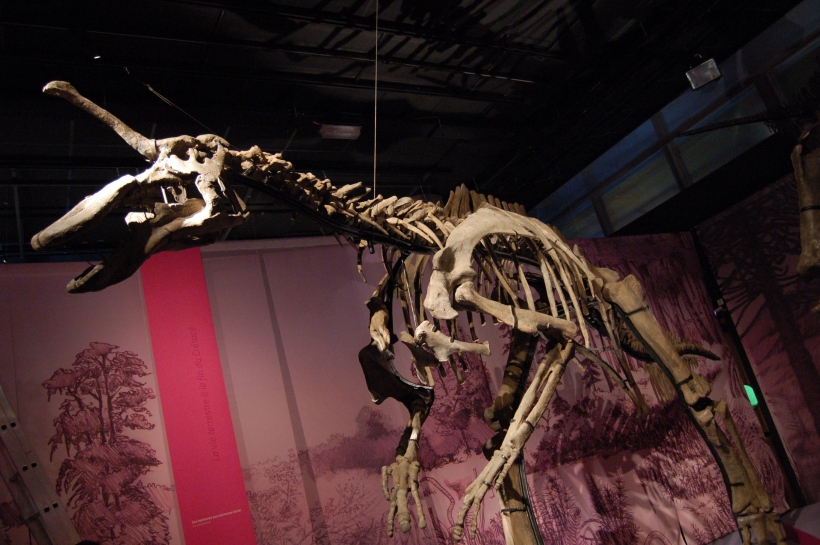 It’s probably for the best though, because it’s been made incredibly phallic-looking over the years, mainly thanks to people adding inflatable air sacs at the base to make it look more spectacular. That’s not to say it wasn’t a phallic symbol in real life though, because it probably had a flap of brightly coloured skin attached to it for impressing potential mates. The point of contention is its direction.

True to form, despite its skull being amazingly well preserved, Tsintao has refused to throw us a bone about the missing parts of its crest. Philippe Taquet, for example, thought its crest actually laid flat and had just been mashed upwards during the whole “millions of years of fossilisation” lark.

David Weishampel and Jack Horner also posited it was a broken nasal bone, and, like Taquet and A.K. Rozhdeventsky before them, thought it could be another specimen of a fellow but hornless hadrosaur, Tanius. Maybe even a teenage version, in Taquet’s opinion. (Also, props to it for having the second-shortest dinosaur name ever.)

A couple of years later, Eric Buffetaut and Haiyan Tong-Buffetaut came to the rescue with another Tsintao skull they had studied, and confirmed that the crest both pointed upwards, and was distinct enough for Tsintao to be a separate species. This might not sound like much, but when it comes to the hadrosaurs, having a crest that sets you apart from the crowd can be a big deal.

A nation of variation

Previously, new hadrosaur species appeared left right and centre based on their slightly differing head gear. Then Dr. Peter Dodson from University of Pennsylvania stepped into the ring, and after careful analysis, reduced one group formerly consisting of 13 different species of hadrosaur into just two: Parasaurolophus (“Pompadour”, or “Parasaur” to those who play Ark), and Lambeosaurus (think Elvis hair). Why?

Well, for one thing, what makes more sense: 13 different but very similar species living alongside one another, or just two species with slightly different individual horns due to age, gender or region? So for Tsintao’s crest to set it apart, it must have been pretty distinctive. Having a unique, thick upper beak rim probably helped as well. But what of its “alicorn”?

The legend sort of died in 2013, when Albert Prieto-Márquez and Jonathan Wagner took another look and theorised that the spike was just the back end of a crest that started at Tsintao’s snout. Said spike would have been pointing slightly backwards, while the rest of the crest was domed and hollow with a looping nasal passage inside. This would have given Tsintao some distinctive, low-frequency calls rather than the bellowing expected of its cohorts.

Regardless, China’s Jingangkou Formation, where Tsintao was found, would have been a sea of noise 70 million years or so ago in the Late Cretaceous.

Tsintao likely lived in large herds for protection, especially as oriental T-rex analogue Tarbosaurus was on the prowl, and while its incredibly strong and replaceable teeth were ideal for grinding conifer needles and cycads, they were no match for massive jaws and fangs. At least Tsintao could have made a quick aquatic escape with its paddle-like forelegs and thick tail. Having the ability to move on four legs and stand on two for scouting out food, mates and danger probably didn’t hurt either.

We, on the other hand, are still looking for its “real crest”, especially after a 2017 study by Zhang et al, which questions whether the horn of the original Tsintao specimen does in fact belong to it! A CT scan revealed a solid crest with no chambers inside, the opposite of what we’d expect from it and a dinosaur in its sub-family lambeosauridae.

All I can think is there’s still enough magic left in its horn to confuse us.

Where? China, 83-71 million years ago during the Late Cretaceous.

Probable motto: Unicorns don’t exist, but I did. I win by default.

Prieto-Márquez,  A., and Wagner, Jonathan R. 2013. “The ‘Unicorn’ Dinosaur That Wasn’t: A New Reconstruction of the Crest of Tsintaosaurus and the Early Evolution of the Lambeosaurine Crest and Rostrum“,  PLoS ONE 8(11): e82268.

Featured image credit: “A life restoration of the hadrosaur dinosaur Tsintaosaurus spinorhinus showing the 2013 skull and crest interpretation by Prieto-Márquez & Wagner”, by Steveoc 86.

One thought on “Tsintaosaurus’ Horn Moved Back and Forth”