I’ve already argued for a spider being “cute”, but I think the battle for the ocellated angelshark will be easier.

For instance, it looks like it has worried eyebrows or is fast asleep with big nostrils, and in both cases seems to have huge, backwards-pointing bunny ears.

The “angel” part of its name also earns some adorable points, but what about the rest of it?

Well the “ocellated” part refers to the “ocelli”, small and simple eyes, or eye-like coloured spots you’d find on peacock feathers or butterfly wings. A quick look at the featured image and you’ll “spot” that it doesn’t have any, but much like the specimen itself, they were lost over time. Unlike said specimen, the spots never turned up again, and in life they’re one of the main things that set it apart from the rest of the angel sharks, or Squatinidae.

When very much alive and gliding over the sand, the ocellated angelshark has three pairs of large black spots: two on each pectoral or front fin, and another one either side of its tail. It also has the smallest mouth and closest-set eyes in its family, as well as some fancy nasal flaps.

The chaps are ready for love once they hit a body length of 85 cm (2.7 ft), but the ladies wait until they hit about 1 metre (3.2 ft), and the ruler-length pups don’t pop out of Mum until they’ve snacked on some yolk. Among the few adults we’ve caught, we’ve collected a range of colour combos too.

The South China Sea is where the ocellated angelshark calls home, and while a local catch from Hong Kong was dark brown, a Taiwanese equivalent was a velvety grey. The Vietnamese catch, on the other hand, was light brown with rusty star-speckles all over its back. So it’s either a possible regional variation, or different methods of keeping them fresh.

It’s found off the coast of northern Malaysia too, and prefers to shuffle in the sands 100-300 metres (328-984 ft) down near the continental shelf.  With eyes on top of its flattened head, it’s well suited to concealing itself in the sand until unsuspecting prey flickers overhead. While it has some electroreceptor pores dotting its face and underside like freckles, there’re fewer than in other shark families, so it’s possible that, despite burying itself and then attacking in a flurry of sand, it uses its sight more than its fancy shark electrodetection system. Its eyesight is definitely better than ours when it comes to identification. 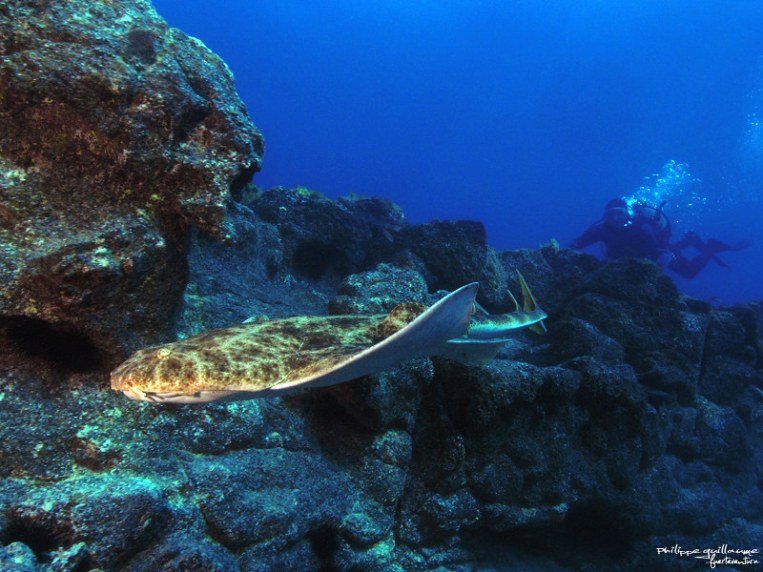 At a quick glance, the ocellated angelshark resembles a ray, but it’s frequently mixed up with other members of its family too, especially when several species congregrate in a particular region. Their angel-like design must be working somehow, because there’s very little variation between them, and the original descriptions of the species were pretty lacklustre, making it even more difficult to discern them and their status.

Another thing the angel shark has been mistaken for? A cure for various Roman and mediaeval ailments.

Until sometime in the Middle Ages, Roman scholar Pliny the Elder’s work Natural History was the authority on all things, er, natural, and he claimed the skin of an angel shark was good for dusting, acne, and rather bizarrely, swollen breasts. 1700 years later, and the Gentleman’s Magazine had us believe that a mummified angel shark or “Jenny Haniver” touring the country was a ferocious sea dragon, caught off the Suffolk coast by an unlucky man who lost an arm to its bite. Fortunately, the author of the Natural History of British Fishes, Edward Donovan, wasn’t fooled.

This happy little shark was featured in said book, so he knew what he was talking about. Image courtesy of Rawpixel.

Angel sharks have teeth so a bite or two isn’t quite as ridiculous, but attacks are rare and usually an act of self-defence. And while we’re long past accusing them of devouring limbs or curing illnesses, angel sharks are still under threat.

Living in relatively shallow waters puts you at risk of fishing trawlers, and angel sharks are frequent victims of by-catch as a result, not least because they fancy chomping on the same fish. According to the Shark Trust, holding one by its fins or tail isn’t just impolite, but can put immense pressure on its internal organs, and blithely flinging it back overboard also wouldn’t do much for its well-being. Instead, they recommend placing a sea-water soaked towel over its eyes to stop it thrashing in a panic, and supporting its belly while gently lowering it back into the water. This is more aimed at the endangered Mediterranean and Atlantic species, but given the similarity, it probably holds true for the ocellated angelshark too.

We still don’t know all that much about it, so more research is needed before we can say definitively if it’s in trouble. In any case, it’s probably best to err on the side of caution with a shark, regardless of the situation.

What? Ray-like shark with distinctive fin dots and nasal flaps.

Endangered? Listed as Vulnerable, due to risk of by-catch.

Probable motto: I’d rather not end up a literal angel, thanks.

They look quite sweet. Do they need my help at all?

We have such little information to go on, we’re not entirely sure of its status or population, so there are no conservation drives at the moment. However, some of its Mediterranean and Atlantic relatives are in desperate need of protection, so the Shark Trust and the Angel Shark Conservation Network look out for their interests.

“About angel sharks“. No date. The Shark Trust.

Theiss, Susan M., and Ebert, David A. 2013. “Lost and found: recovery of the holotype of the ocellated angelshark, Squatina tergocellatoides Chen, 1963 (Squatinidae), with comments on western Pacific
squatinids”. Zootaxa 3752 (1):73–85.

“What are angel sharks?” No date. Angel Shark Conservation Network.

One thought on “Details Are Spotty on the Ocellated Angelshark”