In the forests of Bahia there is another monkey […] which the Indians call Saîanhangá, which means “evil monkey” […].

These are very large, and walk around only at night […] people fear them, and when people hear them scream they say that someone is going to die.

Sure, 16th century explorer Gabriel Soares de Sousa, that sounds like a great pet. That’s not the only thing the Central and South American kinkajou has been mistaken for, though.

Originally recorded as a lemur (er, Madagascar’s 6,500 miles that way, guys), the kinkajou baffled many a researcher because it looks and acts like a primate.

It has a semi-prehensile tail for grabbing onto branches, although less so for grabbing on to food, and it has the usual rounded ears and big eyes you’d expect. 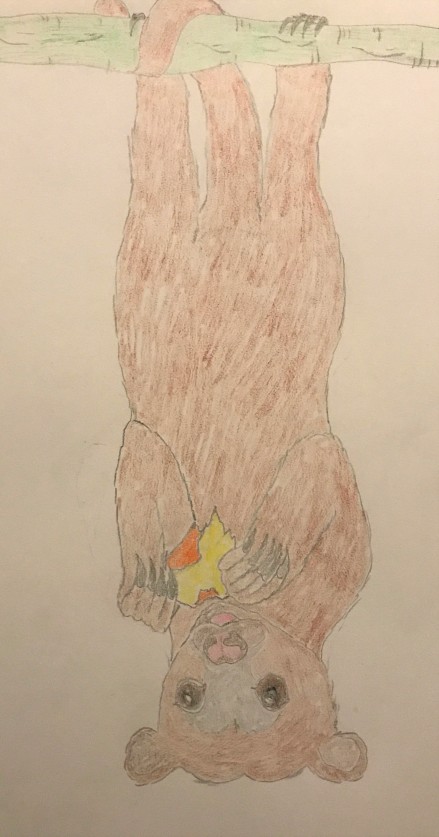 It spends its life in the rainforest treetops too, mostly chomping on fruit but occasionally snatching insects and even small mammals and lizards. Its name comes from the word for “honey bear” – another of its English monikers – and the Latin, Potos flavus, “golden drinker”, also refers to the nectar it slurps with its 13 cm (5 inch) tongue. Fortunately its woolly coat, also usually golden, is thick enough to ward off any stinging resistance to a hive raid.

For extra manoeuvrability, it can swivel its head and pelvis almost 180 degrees from each other, and its similarly flexible wrists and ankles help it climb up its own tail, head-first down a tree trunk, or backwards along a branch at the same running speed. So it’s as sprightly as a monkey, which it also isn’t. One thing you will be pleased to know it’s not is a crying woman.

Its Spanish nickname, la llorona, means exactly that, based on the occasional shriek it gives from the treetops (and when someone is apparently about to die). But as we’ve seen with the red-bellied lemur, you need to make a bit of noise when you have a complex social structure.

For years we thought the kinkajou was solitary, but it’s just career-focused. Although it forages for food alone, its go-to-group is one female and two males, sometimes with a baby and sub-adult. The extra pair of male hands helps defend the territory, and territory is generally dictated by what the female needs to eat.

She’ll spend most of her life pregnant or lactating, after all, and 18 months is a long stint of child-rearing for a small mammal. While the chaps keep her company and protect the area, she’s technically a single mum, and until her baby’s big enough to grip and ride on her chest, she stashes it in a tree hollow. Because even the treetops aren’t without their dangers.

By the slow and deliberate way the kinkajou places its feet along branches, you’d think it was afraid of falling, but death can come from above or behind as well, from a harpy eagle, jaguar or ocelot. For this reason, it seeks cover just before dawn, and doesn’t emerge from its tree hollow until mid-evening (about seven o’clock in human time) to forage for food until around midnight.

The big and innocent eyes, despite appearances, are mostly useless in the dark and can’t even distinguish colour very well – something else odd about an animal that eats fruit! Luckily its sense of smell and touch are more honed, but then who wouldn’t need to be careful with pointy claws like that.

The other thing it needs to be careful of? Poachers.

You’re so cute I could just eat you! Oh…

Thick woolly fur can already be a death sentence, but the kinkajou is also a local delicacy, not to mention popular in the exotic pet trade. According to the IUCN, its range and population don’t quite push it into Near Threatened territory, but with deforestation and a slow reproductive rate on top of the above pressures, it probably wishes it did look like an evil monkey.

Alas, it’s more closely related to the cute and sassy raccoon, so maybe it can give it some tips for survival. Or at the very least, some trash-talk.

What? Arboreal mammal from South America, related to the raccoon.

Where? From southern Mexico to Brazil.

Endangered? Currently Least Concern, although it’s under threat from deforestation, poaching, and the exotic pet trade.

Probable motto: I’m cute no matter what people think I am. Mostly.

They look adorable. Do they need my help at all?

On the one hand they seem okay for the moment, but on the other, poaching and habitat pressures will soon be taking a toll if they aren’t already. Due to their Least Concern status they don’t seem to have any active conservation drives, but the World Land Trust funds Central and South American projects that will also help protect the kinkajou.

Sampaio, Ricardo et al. 2011. “Reassessment of the occurrence of the kinkajou (Potos flavus Schreber, 1774) and olingo (Bassaricyon beddardi Pocock, 1921) in the northern Brazilian Amazon“, Studies on Neotropical Faun and Environment 46(2):85-90.

Veracini, Cecilia, and Teixeira, Dante Martins. 2016. “Perception and description of New World non-human primates in the travel literature of the fifteenth and sixteenth centuries: a critical review“, Annals of Science 74(1):25-63.

One thought on “Kinkajou, What Are You?”