It’s obviously neither made of nor has any characteristics of glass. North and South Carolina and Georgia are definitely considered “mainland”, and Florida is a peninsula. But I admit the snake part might need a bit more explanation.

They weren’t the only reptiles to ditch their limbs. However, “glass snakes”, or glass lizards like this little islander, still hung on to their eyelids, lost their necks, and didn’t try to swallow anything bigger than their heads. Good job really, because their jaw bones would be too rigid. Their genus is still named Ophisaurus, or “snake lizard”, however. 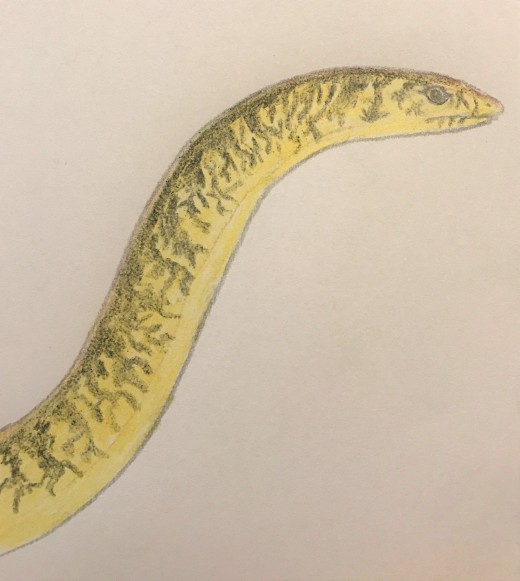 Based on remains from Hampshire’s Newton Bone Bed in the UK, we think the first of them evolved in Europe some time during the late Eocene 35 million years ago, and gradually radiated outwards towards Asia, Africa, and thanks to the Bering Strait, on to North America.

Until 1954, the island glass snake, along with the mimic and slender glass snake, was handwaved away as Ophisaurus ventralis, or the eastern glass snake. 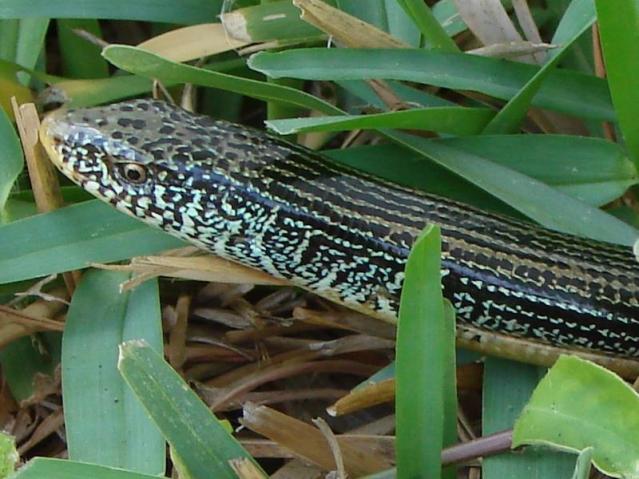 Being handwaved away is especially hurtful if you have no limbs to wave or offensively gesture back, and even when we did realise it was a separate species, it was hard to divorce them completely.

Edwin McConkey, who’d been kind enough to recognise the lizard in its own right, thought one specimen now at the American Museum of Natural History (AMNH 22830) was a hybrid of the island and eastern variety, given some of its markings and size. Further study is required, but why wouldn’t two closely related species enamoured with coastlines, woods, and sand dunes share some of the same features? We’re using that to assume its behaviour, after all. Because yet again, it’s the curse of the “seemingly common” species that’s actually seldom seen.

We think we know its diet – insects and other bugs – and that Mum tends to her 4-18 eggs underground after carrying them around for 6 weeks. But the chocolate side-stripe is not the only thing that veers away from the usual glass snake manual.

Hey, this one isn’t broken

When you’re tiny and squiggly and your tail takes up most of your body, it’s tempting for predators to try to grab you. But aha! You have nifty “fracture planes” that allow you to shed it and escape to freedom, leaving a confused carnivore staring at half your length, and by the time it’s realised what’s happened (if it’s a very stupid predator), it would have started to grow back.

Well, except for the island glass snake, because it doesn’t have any fracture planes. So it doesn’t even “break” like its name, and is usually seen with its tail intact.

Instead, it relies on speed or stillness to escape predators. On the other hand, when it comes to the other kind of threat – habitat loss – it has protection from the most unexpected places.

Did you really want to go there?

The landscape outside the resort area of Georgia’s Little Saint Simon’s Island is mostly undisturbed. Another reason for that is the prevalence of an actual snake, the eastern diamondback rattler.

So while it very probably snacks on the little islander, it keeps human traffic and possible development at arm’s length. That’s not the only unexpected deterrent.

Petersen et al., in their 2018 inventory of Department of Defense installations, found evidence of island glass snakes in 62% of them (96 belonging to the army, 162 belonging to the Air Force). Perhaps it’s secretive for another reason?

Oh, and in case you noticed above, yes, you do sometimes find it on off-shore islands around those states. But it’s found on the mainland as well, so it would be daft to name something after one location when it lives in lots of different places…[checks list]… all right fine, it is noted for being found on islands, but concern is growing for its home on the mainland due to fire and forest management practices. So we don’t actually want it restricted to just the offshore areas.

Plus it’s more amusing and memorable if it doesn’t match any part of its name. Maybe we should rely on people’s appreciation of irony in order to save it.

Where? Southeastern US, specifically North and South Carolina, Florida and Georgia.

Probable motto: You wouldn’t get my name right even if you did know more about me!

They look interesting. Do they need my help at all?

Despite the fires and forest trimming closing in, I couldn’t find any specific campaigns for the island glass snake. However, as above, it’s also (sort-of) protected by living in various DoD areas, as well as within the Okeefenokee National Wildlife Refuge in Georgia and other areas ring-fenced as “national seashore”.

One thought on “The Island Glass Snake. Guess Which Three Things it Isn’t.”