Rather than partying in the wild like the famous Christmas Island crabs, it will be spending this Christmas, and probably many more, in the comfort of Lizard Lodge conservation centre. I’m aware I’ve said “Christmas” too many times in this paragraph – it’s Christmas Day, after all – but spare a thought for this little skink, which has seen even more of them in captivity.

Unlike other blue-tailed skinks, the Christmas Island, or blue-tailed snake-eyed skink, keeps its beautiful electric-sheen tail after its rebellious teen phase. Between basking under a less impressively azure sky, it chomps on insects and squiggles about in crevices, and uses its tail to attract mates, ward off rivals or as a decoy it can shed in an emergency. Unfortunately, the latter isn’t working anymore.

Although abundant on the island in the 70s, its population has plummeted since the 90s. In 2014, it was declared “critically endangered”, and as of 2017, it’s extinct in the wild. Cue much head-scratching, and not just because of a bug invasion. Actually, mostly because of that.

The yellow crazy ant is crazy in the least entertaining way, and thanks to scale bug “honeydew” having the best and worst effects of coffee and alcohol, it has the energy to form aggressive, acid-hurling super-colonies.

Another stinging nuisance is the giant centipede, venomous enough to have killed a child, and skink-hungry enough for 400 of them to have been caught in the 250 metre (820 ft) Lizard Lodge perimeter.

The Asian wolf snake, a lizard-eating specialist and prime suspect in the riddle of the skinks, has slithered ashore too, and feral cats and black rats are an additional fluffy nightmare. But it’s not just the island being invaded.

In 2016, a horrendous Enterococcus infection struck some of the lodge’s blue-tailed skinks with facial defects and death. All but one of the infected died, and yet another invasive species, the Asian house gecko (Hemidactylus frenatus), could be a carrier. We’re still studying this disease, but we’ve found a way to tackle at least one of the aforementioned plagues.

In the same year, we introduced a micro-wasp that attacks scale bugs, so the yellow crazy ants can’t farm as much supercharged honeydew and go on the rampage. A native micro-wasp also does the same thing, but due to low numbers it’s reserved for plan B. As for plan A…

In 2009, Parks Australia, Taronga Zoo and Perth Zoo captured some blue-tailed skinks for breeding. The 86 caught were split between Lizard Lodge and Taronga Zoo, and there are now about 1,500 in captivity, with the goal of breeding 5,000 by 2023. “Relentless mating machine” is certainly a step up from “near-helpless and delicious prey”.

Thanks to the stable climate, the skinks on the home island breed without much intervention, but while their dating scene is pretty even, Taronga Zoo’s is more of a boy’s club, possibly due to the heat.

The ultimate goal, of course, is for the blue-tailed skink to run free again once its numbers are up and the invasive predators controlled. Failing this, we’ve been scouting out neighbouring Cocos Island, but we live in hope that a place of red, sandy-clawed inhabitants could grant a Christmas wish or two. 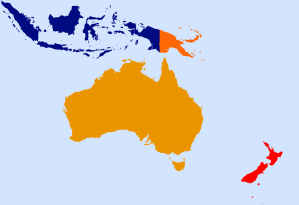 What? Small lizard with an electric-blue tail

Where? Christmas Island, 1,400km (870 miles) northwest of Australia, now only in the Lizard Lodge conservation centre, and Taronga Zoo, Sydney, as a “back-up” population

Endangered? Yes, currently extinct in the wild, although we have about 1,500 in captivity.

Probable motto: Hiding with an iridescent blue tail is harder than I thought.

Yes – they’ve been chomped to near extinction by Asian wolf snakes, yellow crazy ants, giant centipedes and other invasive species. We weren’t able to save the Christmas Island forest skink, but the blue-tailed skink still has a chance.

The Foundation for National Parks and Wildlife is helping extend the captive breeding facilities here, both for the blue-tailed skink and other endangered endemic reptiles.

Lawler, Susan, and Green, Peter. 2016. “A tiny wasp could save Christmas Island’s spectacular red crabs from crazy ants“. The Conversation.

Smith, Michael J. et al. 2012. “The Christmas Island blue-tailed skink (Cryptoblepharus egeriae): a survey protocol and an assessment of factors that relate to occupancy and detection“. Records of the Western Australian Museum 27(1):40-44.

Merry Christmas my [checks list] 8 WordPress followers! May you have an awesome and decadent holiday 😀