Some species are so rare that conservation isn’t enough to protect them. You also need guard dogs, fences and razor-wire. And so it is with Zhou’s box turtle.

Sound laughable? Well Nathan Haislip of the Turtle Survival Center would disagree, given that some turtles are in such high demand just one specimen could fetch thousands of dollars on the international market. What’s more, you could breed 10,000 of them and still see them wiped out if released into the wild within 10 years. Why? The usual suspects of traditional Chinese medicine, food and exotic pets, of course. In fact, this is why tortoises and freshwater and terrestrial turtles are the world’s most endangered vertebrates.

Security is so tight for Zhou’s box turtle at the South Carolina centre that a visiting journalist from The State paper wasn’t allowed to see one. Even then, they probably saw more of them than the research groups looking for wild specimens. After thirty years searching in China and Vietnam, they’ve found exactly nothing, so all we have are the 140 captive-bred ones and the unfortunate “produce” on sale in Guangxi province near the border, where it was depressingly discovered in 1990. 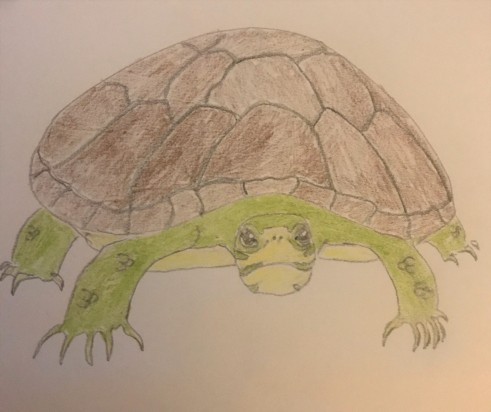 But before we reach vaquita-levels of bleakness, all isn’t quite lost. One good (if depressing) thing about a turtle found in food markets is that it’s used to captivity, and has had some success in getting its freak on therein. There are a few conservation centres scattered around China, Germany and the US as above, but the most baby-booming has to be Germany’s International Centre for Conservation of Turtles (IZS). Despite caring for the turtles in his spare time, Elmar Meier has managed to hatch over 80 babies from just three breeding pairs. No mean feat, since while you may be picturing hundreds of eggs à la a sea turtle, box turtles only lay about two.

Without any wild specimens, all we know comes from the captive crowd, and Zhou’s box turtle seems mostly happy in the water and when chomping mealworms, small fish, fruit and veg. The males and females are almost identical, with a brown carapace and olive-coloured head, but the boys do tend to have larger tails and a dip in their undershell (plastrom). Let’s hope they’re as long-lived as other turtles, because it will probably take a cultural and market shift before they can run free again. Or crawl, at least.

What? A small, semi-aquatic turtle

Endangered? Depressingly so – it’s considered extinct in the wild, and listed as Critically Endangered by the IUCN Red List of Threatened Species.

Probable motto: My shell is a “box”, and I most likely live in a “box”. I don’t fancy the underground kind, though.

They sound cute. Is there anything I can do to help them?

Yes. Probably the only hope they have right now is their respective “arks” – the conservation breeding centres in Germany and the US, and general turtle conservation efforts:

World Association of Zoos and Aquariums

Fretwell, Sammy. 2018. “When turtles become extinct, this secretive center in SC will reintroduce them“. The State.