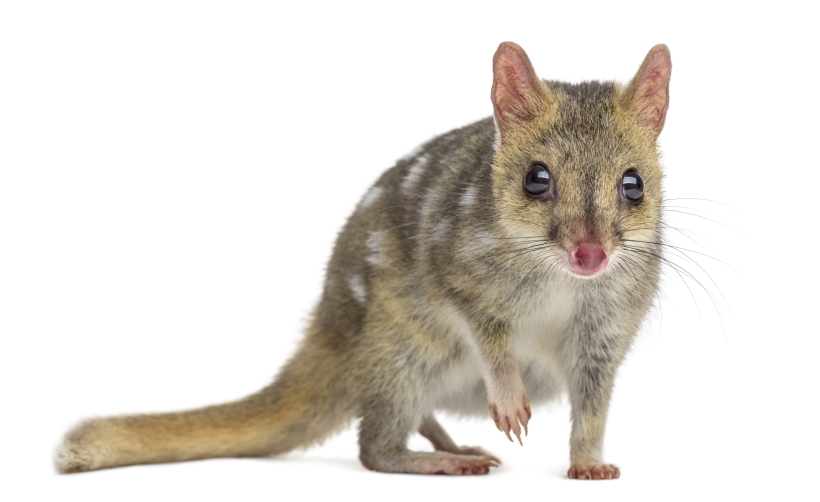 An Australian zookeeper once told me he was nearly disembowelled by a kangaroo kick, and his colleague got their jaw broken by an over-excited wombat.

And that’s just the herbivores. So what on Earth are Australia’s carnivores going to do to you?

In the case of the quoll, formerly (and incorrectly) known as the “native cat”, it’s easy to see who’s in more danger. But that doesn’t mean it won’t put up a fight. After all, when you live fast and die young, you have nothing to lose.

This not-cat and definitely-not-rat is a small, spotted marsupial that generally keeps to itself and lives under cover of night.

Said spots are as unique as human fingerprints, and despite its cuteness, the quoll will chomp mice, possums, rabbits, small snakes, spiny echidnas

and even the odd chicken. It won’t turn its nose up at bugs or rubbish either. In short, it will happily take a piece of whatever’s going. This obviously lands it in trouble with some farmers, but that’s not the only reason it’s under threat.

The other two species, the bronze quoll and the New Guinea quoll, are both found in Indonesia and…wait for it…New Guinea. (No surprises that time). The bronze quoll is the only animal found in the Trans-Fly area of New Guinea that isn’t also found in northern Australia, but the far more interesting fact is that Van Dyck named it after the hero Spartacus (Dasyurus spartacus) due to its “strength, a tenacious fighting spirit, and the capacity to draw blood”. And it’s definitely going to need it.

Stop me if you’ve heard this before, but the Europeans bringing animals over to Australia – such as foxes and cats – didn’t bode well for the quoll.

Neither did habitat loss, people shooting them for attacking chickens, accidentally poisoning them instead of dingoes, and later releasing cane toads, which leaves a bitter taste in more ways than one.

Both the northern and eastern quoll are endangered, with the latter only found in Tasmania and Bruny Island, and the others are considered Near Threatened thanks to that charming list above.

It feels a bit overkill, seeing as the quoll is already pretty good at taking itself off the map.

Like some other members of its family (dasyurids), the quoll doesn’t last long beyond the next generation. Northern quoll males, for example, shuffle off the mortal coil a mere two weeks after mating, and females rarely cling on long enough to raise a second litter the next year. So it’s looking at a lifespan of about 4 years tops. Having other animals and threats come after it is just mean.

That’s not to say it’s unpopular in its homeland, though.

In indigenous Australian culture there’s a multitude of “songlines” – memory songs about the landscape and how to navigate it, its animals and ceremonies – and the quoll is a recurring character.

According to Nick Aitchison from Alice Springs’ Desert Park, a group of elderly Aboriginal men visited the quolls there and began singing their songlines to them, as well as offering to teach the zookeepers some of their ceremonies. This is as heart-breaking as it is awesome, because quolls were extinct in the men’s southwestern homeland, and they hadn’t seen any for decades.

The quoll is also part of some pretty cool folktales.

For one, a Gundungurra tale of cat and mouse between two ancestral spirits: Gurangatch, an incarnation of the Rainbow Serpent (god of creation) and a quoll named Mirragan. Mirragan’s relentless pursuit of Gurangatch, via swimming, digging and stabbing spears into rocks, created the Cox and Wollondilly rivers, which are now mostly behind the Warragamba Dam in Sydney.

In a story of the Boorong, a quoll was in pursuit of something else entirely.

Unurgunite, an ancestral figure and Canis Major in the night sky, had two wives, which are the two bright stars either side of him (Epsilon Canis Majoris and Delta Canis Majoris).

The Moon, a quoll known as Mityan, fell in love with one of them and tried to lure her away, only to be scarred and banished to wander the skies when her husband found out. When the Moon passes close to Delta Canis Majoris – which is further away from Unurgunite – it’s Mityan trying his luck, and when the Moon passes close to Canis Major, the two of them are battling it out.

That’s not the only time the quoll has been linked to amorousness. In the Trans-Fly area of New Guinea, dabbing a paste of burnt and crushed quoll bones on the forehead was thought to create a “love potion” of sorts, to increase one’s chances of finding a partner.

While the quoll itself doesn’t mate for life, it can still pass on some wisdom to its young.

I mentioned that cane toads were also causing a problem for quolls. For those not in the know, the cane toad is an extremely invasive species that fits almost anything it can find into its mouth, and at one point a National Cane Toad Task Force was created to help deal with them.

If you thought “awesome, the quoll can eat them!”, technically you’re correct, but it would be even deadlier to them than having children, because they’re not evolved to deal with the toxins in the toad’s skin, eggs, pretty much all of it to be honest.

However, in Kelly and Phillips’ study, they found that some northern quolls were “cane toad adverse” and deliberately avoided eating them. Offspring of these quolls were more likely to avoid them too, so somewhere along the line a lesson is being learned.

We seem to have learned something at least, because there are a good handful of conservation efforts to protect the quoll and its home. Sometimes it pays to have a fighting spirit, no matter how cute and dinky you look.

What? A small carnivorous marsupial from Australasia.

The northern quoll was named for its big toe, which can be a novelty among the other species. The eastern quoll’s name means “ferret-like”, and the western quoll was named in honour of French naturalist Geoffroy de St. Hilaire. The “chuditch” is its native Noongar name.

The spotted-tailed and New Guinea quoll were both named after their spots, and the bronze after Spartacus, of course.

Where? Four species are found in Australia. You can probably guess where the northern quoll lives, but the eastern quoll is only found in Tasmania and Bruny Island. The western quoll and the spotted-tailed or tiger quoll can only be found in south-western and south-eastern Australia respectively, and the bronze quoll and New Guinea quoll both make their home in Indonesia and New Guinea.

First recorded? The spotted-tailed or tiger quoll was the first one on our radar, discovered by Kerr back in 1792, followed by the eastern quoll by Shaw in 1800.

Gould struck it lucky with both the northern and western quoll in 1841 and 1842 respectively, and in 1880, Shlegel clocked the New Guinea quoll in a collection from the Arfak mountains.

Then there was a gap of 107 years before Van Dyck discovered the bronze quoll.

In all six species, the males are larger than females.

Diet? Being opportunistic, quolls will often grab a piece of whatever’s going, either scavenging or actively hunting. They will eat bugs, other small mammals, and even attack chickens and nesting birds.

Behaviour? The quoll lives fast and dies young, mostly alone. It’s a noctural solo hunter, and once it’s had one set of offspring, it’s usually the end of the road – very few last beyond their first breeding season. It communicates via shrieks and hisses, and the pups spend the first few weeks of their lives in Mum’s pouch, as per usual for a marsupial.

Endangered? Technically only the northern and eastern quoll are considered endangered by the IUCN, but the other four species are “Near Threatened”, due to charming combinations of habitat-loss, retaliation for poultry theft, poisoning aimed at other species, introduced predators like red foxes and feral cats, and if that wasn’t enough, poison from cane toads.

During my research I came across Bush Heritage Australia, which has a variety of wildlife projects in collaboration with local communities. Some of these involve the quoll as well as its general habitat.

Oakwood, Meri. 2000. “Reproduction and demography of the northern quoll, Dasyurus hallucatus, in the lowland savanna of northern Australia”, Australian Journal of Zoology 48(5):519-539

Zoological Society. 1842. “Proceedings of learned societies“. The Annals and Magazine of Natural History 11:232.