It feels odd to find a snake near the bottom of the food chain, but almost everything attacks the poor queen snake – even its own small prey if it isn’t careful.

While it looks similar to the more famous garter snake, the queen snake got rid of its back stripe and just kept the yellow side bands. Like most snakes it’s a sun-worshipper, basking on rocks or branches over water, and is most active during the day.

Unfortunately its semi-aquatic lifestyle catches the attention of fishermen, who sometimes suspect it’s after the same thing they are. It’s also a regular dish for raccoons, eagles, blue herons, large frogs and the awesomely-named hellbender salamander. Even the claws of its crayfish prey can pose a threat if too large, or more than it can swallow if they’re a baby, as this unfortunate slitherer discovered.

If that wasn’t bad enough, just by virtue of being a serpent, the queen snake is often believed to be venomous. Even Charlie Brown thought this was the case, and if you can’t trust a 70 year-old comic strip, what can you trust?

Not your own eyes, obviously 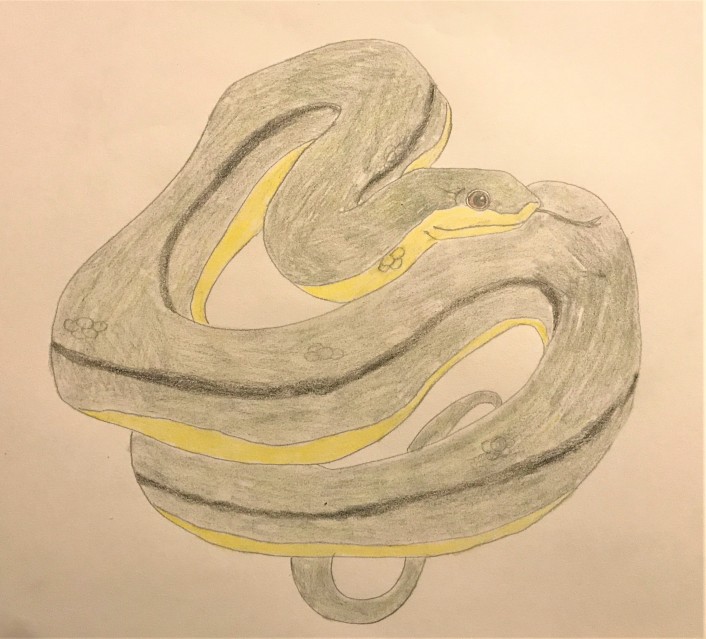 The longest recorded queen snake was almost a metre (3.2 feet) long, but on average it’s twice ruler-length. It can tuck itself into surprisingly small spaces, and according to a 2015 survey by the Ontario Ministry of Natural Resources and Forestry, hide under cobbles of just 8 cm (3 inches) in diameter. Why is this a problem? It can be crushed while doing so, because what on earth could fit under such a tiny stone? It’s not a fan of the other type of crunch, either.

As a royal, it only eats the best. I mentioned that it eats crayfish, but only the ones that are freshly moulted and therefore softer, because chewing an exo-skeleton is too much effort. The queen snake is well equipped to seek them out as well.

Get the juices flowing

In Jackrel and Reinert’s 2011 study, both newborn queen snakes and Lake Eerie water snakes (Nerodia sipedon) were exposed to the chemical ecdysone, released by freshly moulted crayfish. While the latter seemed non-plussed, the queen snakes responded with excessive tongue-flicking.

When both were presented with an extract of moulting crayfish, both with and without ecdysone, the queen snakes again perked up for the former, whereas the Lake Eerie crowd didn’t seem to know the difference. It’s lucky the queen snakes were clued up, because chemical cues are important for queen snake lovin’.

Using his tongue, a male will test the (chemical) waters of a lady friend to see if she’s in season, and if so, they go vent-to-vent. The eggs hatch inside Mum and she gives live birth to 10-14, 17-22 cm (7-9 inch) babies soon after, who can grow by about 80% within their first year.

By the age of 2 they’re technically old enough to party in the adult sense, but probably won’t until the year after. But the more parties, the better it is for the river.

The queen snake is a sign of a healthy water source, because it means lots of crayfish. Crayfish are extremely sensitive to pollution, so if they’re also partying hard, the queen snake will rock up as well. Of course, too much silt or chemicals in the water can severely affect both sides. Jackrel and Reinert’s study also raised some concerns in this regard, because some pollutants can have a similar effect to the aforementioned ecydsone, and mess up the crayfish’s moulting. That’s not the only plague the queen snake has to deal with.

Although considered Least Concern thanks to its large range, the queen snake is listed as endangered in Canada, and an unwelcome snake fungal disease known as, er, Snake Fungal Disease, has also been sweeping the landscape. Just in case crusted skin, abnormal moulting, cloudy eyes and facial disfigurement weren’t enough, it can bring death by starvation to the party as well, and as of 2017 has been detected in one Canadian province and up to 23 US states.

Human handling may help it spread too, so in case you wanted another reason not to handle a musk-happy and fear-incontinent snake, there you go.

Besides, a small, harmless serpent that acts as a health bar for your water supply is due some respect, so maybe we should salute it rather than put our grubby mitts all over it.

What? Small, black snake with a yellow side stripes and belly.

Where? North America, mostly eastern US and southern Canada, in rivers and streams flush with crayfish.

Endangered? Considered Least Concern, due to a wide range.

Probable motto: Be honest: is this title just to make me feel better?

They look…interesting. Do they need my help at all?

The queen snake has a large range, but it’s considered endangered in some areas. Ontario Nature has a Reptile and Amphibian Stewardship as well as campaigns for local wetlands. Nature Conservancy Canada also hopes to work with local landowners to boost the local queen snake population.

One thought on “The Queen Snake Deserves More Royal Treatment”