This dinky desert bird looks like a lizard with its flat head and big eyes, a wasp’s nest with its yellow and grey marbled feathers, and a fallen fledgling with its awkward shuffling along the ground. So it’s no surprise that, before we even get to its decidedly un-bird-like behaviour, it’s been mistaken for all sorts of things.

That must get its goat

First off, along with the rest of its genus, the Egyptian nightjar has been accused of goat-sucking.

Because it obviously looks like a South American monster. Image by Irvin Calicut.

That’s what the Latin “Caprimulgus” means anyway, based on the belief that it crouches on the ground waiting for an unsuspecting goat before grabbing a quick milky snack.

It actually hangs around livestock for the buggier kind of meal, so a rather generous theory by archaeologist and landscape historian Tim Sandles suggested someone once saw it grab a fly off a goat’s teat, and then let their sense of logic take the scenic route. But feasting on insects has landed it in trouble far worse than some folkloric finger-wagging.

Will it see the light of prey again?

In what had to be a depressing study, Jackson and Slotow looked at the mortality of Afrotropical nightjars, adding an amusingly frank “mainly roadkills” to the end of the title. Although the Egyptian nightjar was fairly low on the casualty list, the authors posited that some birds associated vehicle headlights with insect prey, and if not careful, were rewarded with a face full of grill. The Egyptian nightjar has been seen hunting in towns too, possibly for the same reason, but it has every reason to hate machines.

The perils of long-haul

The deserts of north Africa, the Middle East and central Asia are its land of love, and tropical Africa its winter digs, but the Egyptian nightjar has been found in some unexpected places.

Langley Air Force Base Virginia, for instance, thanks to a free one-way trip in the landing gear of a DC-10 airliner. And the first time it was ever seen in the UK, it was greeted with metal on arrival.

It was 1883, and Nottinghamshire gamekeeper Albert Spink had just shot a rabbit. Said shot frightened a bird to his left, so he shot that too, because why not.

Dismissing it as a youngster, he then flung it in an ashpit, only for his ornithologist boss Joseph Whitaker to grab it the next day and send it off to his taxidermist, who proclaimed it the first Egyptian nightjar to reach the UK. It had possibly overshot its summer migration route, if you’ll pardon the pun, and makes its home today at Mansfield Museum. 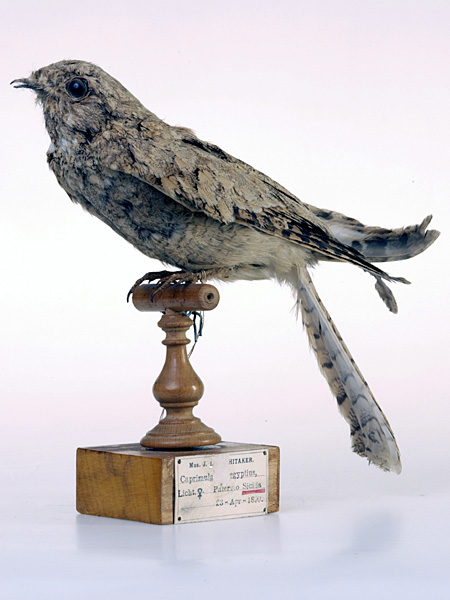 A memorial stone was also built in honour of it and the landowner’s modesty:

This stone was placed here by

of Rainworth Lodge, to mark the spot where the first British specimen of the

It was utterly demolished by vandals/grammar Nazis in the 1970s, and a smaller, less destructible stone was erected in 1989, because human beings are terrible creatures.

Even when we try to immortalise it.

Which disguise is worse?

It’s not clear if Mr. Spinks shot it on impulse, or because he thought it was a bird of prey thanks to its kestrel-like pattern and angular flight wings. But the latter is why the Egyptian nightjar was occasionally gunned down in parts of north Africa in the early 1900s, and mobbed by local barn swallows during a more recent appearance in Georgia.

The confusion isn’t always one-way either: the incredibly rare and elusive Vaurie’s nightjar (Caprimulgus centralasicus), known from only one specimen from 50 years ago, was labelled for years as the Egyptian nightjar. Another thing it’s confused with? Bare desert ground.

One researcher almost trod on a female and her two eggs while investigating its first appearance at the north end of the Dead Sea in 72 years, and he only knew to look because one was found in the grill of yet another car two years prior. Floofed out on the ground under a broken branch, she was practically invisible, and since Egyptian nightjars don’t create any kind of obvious nest, it would be all too easy to trample all over them. That’s right – it’s a bird with no nest that prefers the ground to trees.

Another bird from opposite world

Even in its winter digs down in Sahel, the border between Senegal and Sudan’s savanna and desert, it sits in the grass rather than on a perch, and if disturbed, makes a grumbling noise as it shuffles off in search of another resting spot. And while it’s able to pant extremely quickly to stave off the desert heat, it’s only really active during the day if its roost is too hot. Because in case you hadn’t guessed from the name, the Egyptian nightjar is all about the evening.

It usually sings when there’s more darkness than light, and the males in particular make a purring kowrr of 3-4 notes a second, chittering on for minutes at a time and comically wobbling their throat as they go. But the noise is only for the neighbours and ladies: its cute and fluffy feathers give it a completely silent flight for snatching unsuspecting flies, crickets and other bugs. The adults will moult them once a year after breeding, but if time’s wasting, they might wait until they’ve safely landed in post-migration Sahel before finishing it off. (The moult, not the breeding.)

Since it has such a large range, the Egyptian nightjar isn’t in any imminent danger, but its multitude of disguises and bizarre behaviours seem to get it into rather than out of trouble. Perhaps it would make a good Hollywood spy? 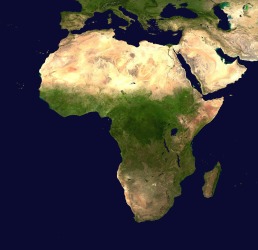 What? Small, well camouflaged desert bird that sings at night.

Where? Desert and semi-arid desert, usually in Egypt and other parts of north Africa, the Middle East and central Asia. In winter it migrates south to the savanna of Sudan and Senegal.

Endangered? Currently considered Least Concern due to its wide range.

Probable motto: It’s not my fault you don’t get innovation.

Thanks to its desert home, wide range, and lack of commercial value, the Egyptian nightjar doesn’t have any ongoing conservation drives.

Cleere, Nigel. 2010. “Nightjars: a guide to nightjars and their related birds“. Helm.

One thought on “Is the Egyptian Nightjar Too Well Disguised?”