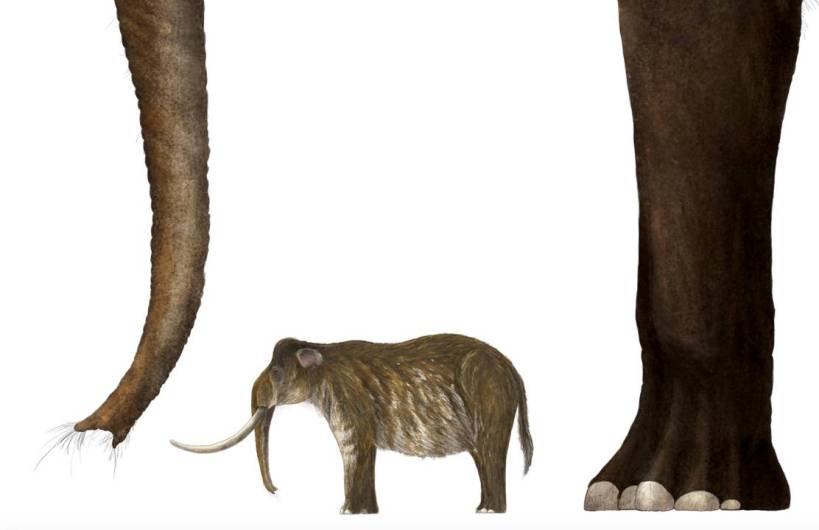 At a time when most other Eurasian mammals were living it large, a handful of straight-tusked elephants, Palaeoloxodon antiquus, decided to buck the trend and go smaller. And it worked so well for them in the Mediterranean, they did it at least six times. The result? About seven species of dwarf elephant.

Separate to the modern day pygmy elephant, dwarf elephants trundled about on Malta, Sicily, the Aegean Islands and Cyprus up until about 11,700 years ago in the Pleistocene. But what cut such a large land mammal down to size?

Well to start with the obvious, there’s no point ruling your own island if there’s hardly any island to rule. Space would be at a premium, as would food, and with no horrendous mainland predators, no one’s going to pick on you for being short. As an added bonus, reaching adulthood at a much smaller size would save you a ton of energy. And for some dwarf elephants, that was the case: the dinkiest, Palaeoloxodon falconeri of Malta and Sicily, was only about the size of a pig.

It was clearly drawn by someone with trotters.

However, they didn’t all scale down in the same way, mainly because they didn’t all aim for island-living at the same time. Cyprus’ Palaeoloxodon cypriotes, for example, was bigger than P. falconeri, but had far teenier teeth, possibly because it rode an earlier wave of dwarfism and therefore made more evolutionary tweaks. Their evolving in different ways and at different times raises the question: how did they get to the islands in the first place?

Before you say “they obviously swam”, not always. The Pleistocene Mediterranean saw land bridges aplenty, and at one point Malta and Sicily were linked.

As for the Aegean Islands, we think elephants reached them on two separate occasions due to the rising and falling sea levels: once about 900,000 years ago, and again about 200,000 years ago, the latter load of travellers being the Palaeoloxodon crowd. There were considerable distances between the islands, so fanning out from the mainland to the nearest would have been more likely, rather than any inter-island swimming galas. In any case, elephants spread themselves in more ways than one, fnar fnar.

A few scientific heads exploded recently after examining P. falconeri’s DNA. Although clearly descended from the African-born, straight-tusked P. antiquus, P. falconeri was, in fact, more closely related to the modern Asian elephant. It turns out this was possible because P. antiquus had a lover in almost every port, both during and after it left Africa, and enjoyed a cuddly clinch with the local mammoths as well. Finding such a varied species in some unexpected places gave rise to legends as well as debate.

A dwarf elephant skull, on average, is about twice the size of a human’s, and has a huge nasal cavity slap-bang in the middle. According to Viennese palaeontologist Othenio Abel, this inspired the myth of the Cyclops in ancient Greece. A far less feared or accepted interpretation of a dwarf elephant is that depicted in a painting in the tomb of ancient Egyptian noble Rekhmire.

Syrians bringing an elephant and a bear, tomb of Rekhmire. The Metropolitan Museum of Art.

Some scholars believe it’s your standard baby Syrian Asian elephant, but it’s been playfully suggested that a dwarf elephant would have been suitably dinky and manageable too. Our fondness for miniature animals clearly hasn’t changed over thousands of years.

And then sometimes the person who discovers said dwarf elephant is a legend, like Natural History Museum London’s Dorothea Bate. She talked her way into a job as the museum’s first ever female scientist at 19, and as well as uncovering the first proof of dwarf elephants in Cyprus, she disguised herself as a man so she could travel to then-Turkish-controlled Crete and continue her research. Legends can come from awe and a lack of knowledge, and for the dwarf elephant, we’re still struggling with the latter.

Maybe they shrank too far?

It seems we’ve been underestimating the size of P. falconeri’s brain, which is the only animal brain ever to be comparable in size to a human’s. Whether this is due to the same complex social and cognitive tricks of today’s elephant, or just its brain staying the same while the rest of it shrinks, is up for debate. Still, we’ve also got the weight of them wrong, based on some handy 3D model calculations, and we’re not clear on exactly how many different species there are thanks to all the interbreeding. Even its extinction exit isn’t confirmed.

There’s some evidence a 7,000 year-old Neolithic people on the tiny island of Tilos had a weakness for dwarf elephant ivory, but unlike for some other prehistoric mammals, it’s not an open and shut case. It seems more likely that island living was the be-all and end-all: after a time, dwarf elephants may have been too safe in their little havens and adapted too well, being utterly unprepared for any shifts in climate, or new land-bridges that let the mainland predators re-join the party.

I can think of worse fates than dying on a small and sunny island after years of enemy-free peace and quiet. And if a predator suddenly caught you at the end of that, you’d probably go out on the most amazing adrenaline rush.

Latin: Genus name is Palaeoloxodon, and there are several species such as P. falconeri and P. mnaidriensis.

Where? Mediterranean islands from 2 million to 10,000 years ago during the Pleistocene period.

Probable motto: Better to be a big fish in a small pond.

Benoit, Julien. 2019. “Evolutionary history of elephants is being rewritten by a strange, straight-tusked species“. Newsweek.

Sevket, Sen. 2017. “A review of the Pleistocene dwarfed elephants from the Aegean Islands, and their paleogeographic context“, Fossil Imprint 73(1-2):76-92.

van der Geer, Alexandra Anna et al. 2014. “A dwarf elephant and a rock mouse on Naxos (Cyclades, Greece) with a revision of the palaeozoogeography of the Cycladic Islands (Greece) during the Pleistocene“, Palaeogeography Palaeoclimatology Palaeoecology. DOI: 10.1016/j.palaeo.2014.04.003.

2 thoughts on “Wild Elephants in Europe? Are You Mad?”