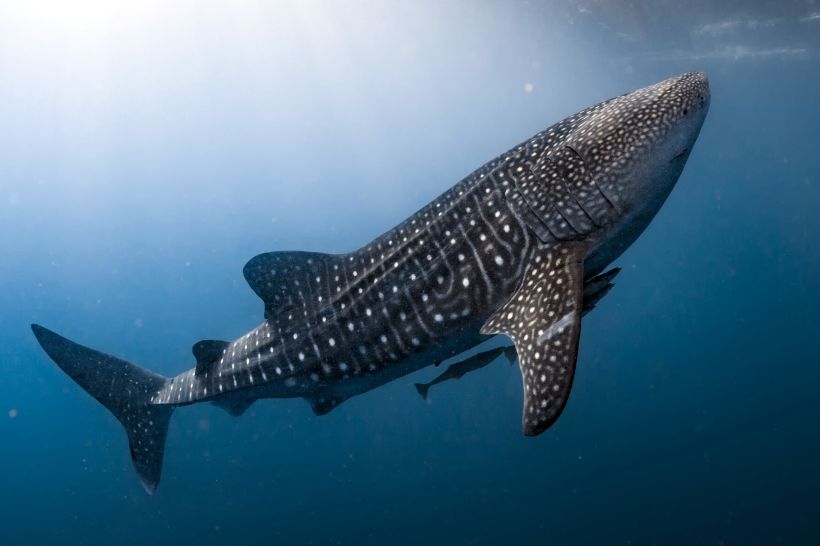 Surprisingly, the size isn’t the first thing you notice about the world’s biggest fish.

The speckles and loops of its skin resemble Aboriginal dot art, and it has a wide, blunt mouth that looks like someone sat on a burger bun. Somewhat less surprisingly, this giant, polkadot, bus-length shark grabbed our ancestors’ attention too.

Whale of a tale

In Kenyan folklore, it was literally known as the “shark covered in shillings” (papa shillingi) because in honour of its beauty, God and the angels rained gold and silver coins over its back. In an Indian Buddhist tale, it’s depicted on a coin, or rather the Timingila Jataka Medallion. It somehow swallows a ship of 500 men, whose prayers to the Buddha jolt its memory of its past life as a monk.

Realising eating the men would result in a karmic cataclysm, the whale shark saves the ship and starves to death before returning as a monk again.

Despite the 1.5 metre (5 foot) mouth and 300 teeth, the filter-feeding whale shark doesn’t actually eat humans – we wouldn’t fit in its oesophagus for a start – but it does attract money, in more ways than one. 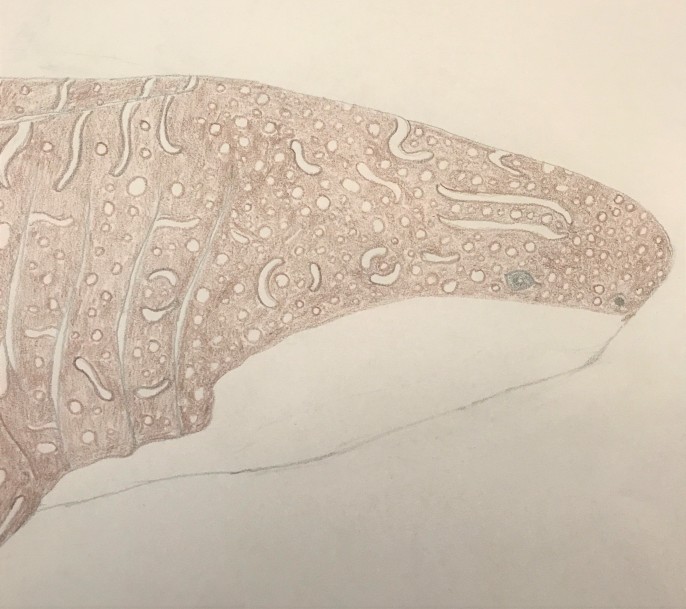 Catch of the day

Historically, whale shark products were considered too much hassle, but by 1997 in Taiwan, a 10 ton shark could fetch up to $70,000. Although it’s now a protected species, demand for its fin and “tofu shark”meat have risen. So try to act shocked that the Indo-Pacific population has plummeted 63% over the last 75 years. The smaller Atlantic population has fared better due to the lack of fisheries, but both have inspired other means of swimming in coins.

Whale shark tourism is worth over $42 million annually, and as well as rejuvenating fishing villages, it’s created an entirely new tourist season in Western Australia. But at what cost?

On the surface, the whale shark seems nonplussed by humans hitching a ride. Thanks to the unique pattern behind its gills, we can track individual sharks, and there’s no correlation between the ones that avoid divers and those which previously swam with them. Then again, a study by Jackie A. Ziegler, Philip Dearden and Rick Rollins (nice!) found it was the accompanying boats that spoiled the party.

Even if this was to scale, it wouldn’t be a fair fight. Image by Sergey Novikov.

More than two of them on site, and the sharks started deep-diving or shuddering to get away. You can’t really blame them when they find boat strikes about as fun as net entanglement, and for an animal that breeds slowly – it won’t usually get jiggy before its 20s  – this spells trouble. When it does breed, however, it’s a big event.

A female caught in Taiwan not only had two uteruses, but over 300 pups, a record for the largest litter among sharks. Although they were at different stages of development, they were fathered by the same male, so maybe it’s big on monogamy too?

On the other hand, according to research from Australia, it seems to be getting smaller, and it’s unclear if this is down to tourists disturbing its feeding sites. We should be shrinking the gaps in our knowledge, not the world’s biggest fish! Besides, “slightly-larger than average” shark just doesn’t have the same ring to it.

What? Biggest shark, and fish, in the world.

Endangered? Yes, due to fishing, bycatch, and boat strikes, and an incredibly slow reproductive rate.

Probable motto: I’m a shark but act like a whale. And get the worst of both worlds, dammit!

They look amazing. Do they need my help at all?

Yes: bycatch and boat strikes, as well as demand for its meat and fins, aren’t exactly helping matters.

While tourism is a much lesser evil, it still carries risks, so WWF are trying to encourage the safe and sustainable kind.

If you’ve been lucky enough to see one in the wild, you can help bump up the Wildbook for Whale Sharks or adopt one if you fancy.

Summers, Hannah. 2018. “How whale sharks saved a Philippine fishing town and its sea life“. The Guardian.

Featured image credit: “Whale Shark very near looking at you underwater in Papua it does not attack humans” by Andrea Izzotti.

One thought on “The Whale Shark: The Other Kind of Money Shark”