“I know, but what is it? Sounds like a posh name for a cheap fish, or a fancy name for a gross one”.

“Neither. It’s an extinct marine mammal”.

“Then why did you come over when I said ‘waiter’?!”

I hope you smiled, because it’s only downhill from here. This huge, huggable species was like the innocent village tragically wiped out by the empire during the hero’s quest. Except in this case, the hero was also less than stellar.

At least in the beginning, Steller’s sea cow’s luck was as great as its hunters’. In 1741, one of Vitus Bering’s explorer ships was stranded on the Commander Islands near Russia. On board was Georg Steller, a German zoologist who, in between chewing herbs to dodge scurvy, decided to study these amazing manatee-like animals, that at 10 metres (30 feet) long, could easily out-bulk an orca. 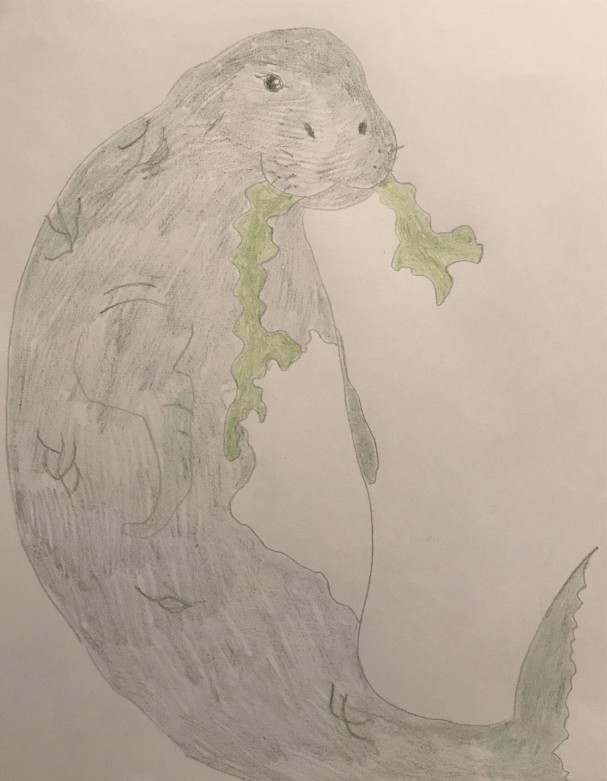 Possibly due to their size and buoyancy, the sea cows couldn’t dive and moved very slowly in the shallows, so gently munching sea grass and kelp near a horde of armed and starving sailors was never going to end well. That’s not to say they were entirely defenceless.

Bark worse than their bite?

Unlike their modern day counterpart the dugong, Steller’s sea cows had skin “like ancient oak” which was “almost impervious to an ax or the point of a hook”. They were also extremely protective: one heartbreaking account described a male chasing and ramming a boat after the sailors killed his mate, and hovering by the shore while they diced her up. Such kinship, while touching, landed the sea cows in hot water, because their numbers were both deceptive and enticing.

More populous than it looked

At the sight of their floating herds, Steller seemed to think they were legion, when they may have been hangers-on from a genus that once stretched as far as the USA and Japan. Of course, once Steller and his crewmates returned home, they spread the word: all the blubber you need! Oh, and yet another nail in the extinction coffin: Steller’s sea cow was purportedly delicious. (See, that intro wasn’t completely irrelevant.)

By 1768 – only 27 years after it was first discovered – Steller’s sea cow was extinct. It was obviously too pure for this world. Well, either that, or it once annoyed a gypsy.

Where? The Commander Islands, in the Bering Sea between Russia and Alaska.

Probable motto: You live in groups and love eating too! We’re going to be the best of friends!

Well that was gut-wrenchingly awful. Can I at least help their relatives?

Yup. While the closest is the dugong, “sea cow” can also refer to the modern manatee, and both are considered Vulnerable by the IUCN. You can send them waves of love through the below: