See those big eyes? They can handle 100 billion different light intensities. And unless there’s a gap where your soul should be, they radiate 100 billion watts of cuteness.

Often overshadowed by the flashier ring-tailed and red-ruffed species, the red-bellied lemur is one of the rarest in Madagascar, and one of the least [edit, sorry!] common in captivity. It’s also an outlier because it’s loyal to its lemur-love.

One of the few to form a pair-bond, it lives in a close-knit family group, and has a built-in toolkit for keeping everyone safe and happy. 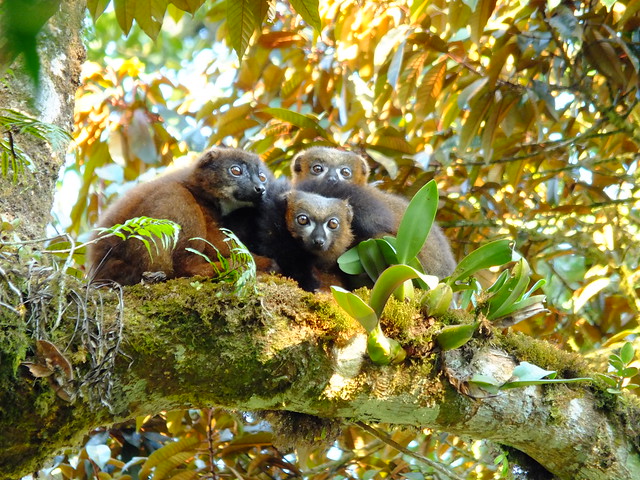 Its lower teeth make a handy comb, both for its own fur and others’, and as well as feeling luxurious, the grooming, er, keeps their “healthy bacteria” topped up and stable. Because when you spend your life camping in the trees, the last thing you want is a horrible illness in your group. Horrible snacks, however, are relative.

If it craves a toxic millipede – and who doesn’t – it drools over it before serving, which is thought to neutralise its poison. The males, which you can spot from the red bellies and white eye shadow, also have a scent gland on their head for marking territory. However, they’re not the kings of the canopy.

It’s the white-bellied female who takes charge here, so she leads the foraging missions and has first dibs on her mate. She pops out one baby a year, and after five weeks of carrying it around, here you go Dad, it’s your turn. But if she gets too power-hungry or unpopular, she could be ousted by an intruder. And on the rare occasion that she does lose her perch, she needs to find another group pronto. 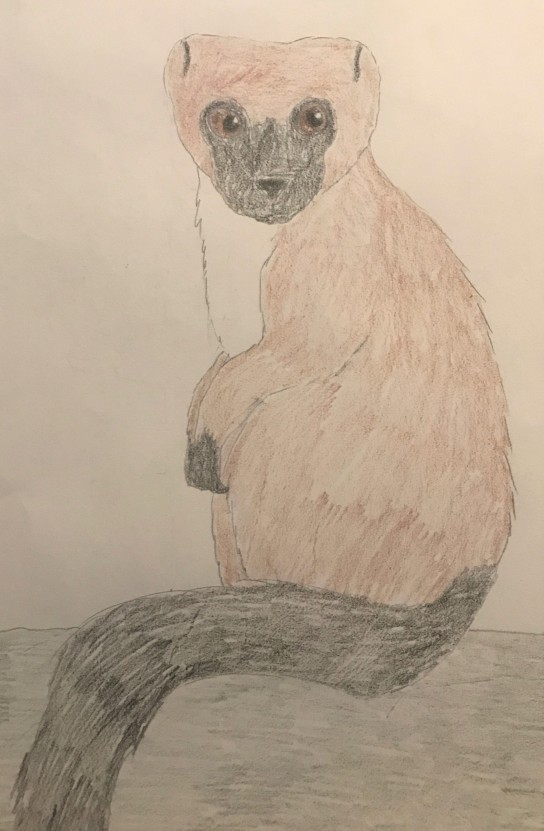 Safety in numbers. As long as you keep them up.

Aside from the family snuggles, group-living helps you out-psyche other lemur troops after your food, and a sentry is always handy for spotting a swooping raptor or creeping, dog-like fossa. Single parenthood would also suck, because even with two doting parents, baby red-bellied lemurs only have a 50% chance of survival. Then again, if food is scarce,  it doesn’t breed anyway, which is a problem for conservation efforts. And for the forest itself!

Passing through the, er, passage of a lemur is essential to the growth of some native plants. The red-bellied also enjoys a dash of nectar, so its pollen-encrusted pout brings about yet more flowers. As a cathemeral creature – active throughout the day and night – eating and moving is what it does best, and the gaping chasm between the light levels of a cloudy night and broad daylight explains the need for large eyes. We’re not entirely sure why it doesn’t stick to one time of day, but its genus hasn’t bothered for about 12 million years, so it’s not exactly a recent development. Not that you could blame it.

Habitat loss, of course, such as “slash and burn” practices, are slicing its corridor of canopy even thinner, and illegal hunting for its fur or bush meat still continues. Being a curious tree scamp, the red-bellied lemur doesn’t exactly help itself in that department. Hopefully it won’t take another 12 million years to learn “don’t go and play with the humans”. Then again, when neither day nor night bother you, would you appreciate time enough to know that it’s running out?

What? Rusty-looking lemur with a red (males) or white belly (females).

Where? A thin strip of rainforest in Madagascar, from the northern Tsaratanana Massif to the Pic d’Ivobe and the Manampatrana River.

Endangered? Lemurs are only found in Madagascar, so a restricted range isn’t ideal, but at the moment the red-bellied is considered Vulnerable by the IUCN.

Probable motto: I’m cute, friendly, and crucial to the rainforest. I’m in trouble, aren’t I?

They look adorable. Do they need my help at all?

Its homestead in Madagascar could use some love too.

Sipa, Masika. No date. “The gardeners of the forest: red-bellied lemurs“. Mada Magazine.