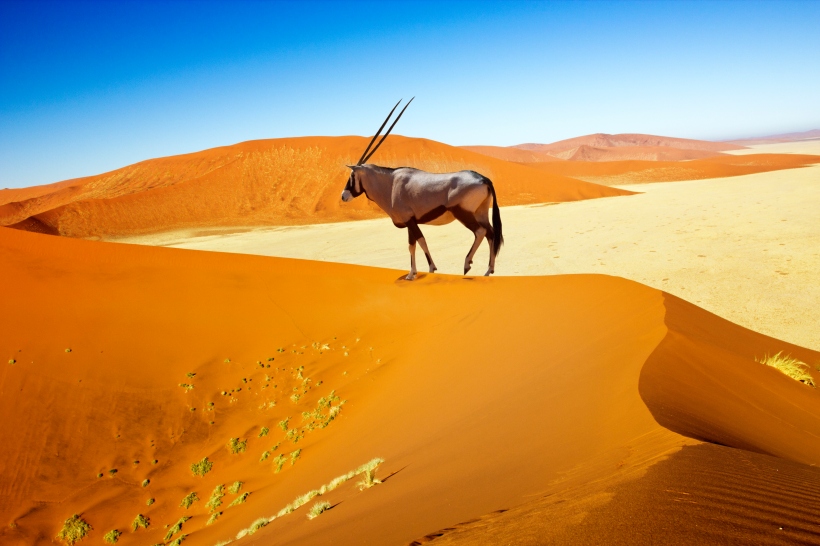 There’s a reason the gemsbok is usually shown as a lone wanderer, striking out across towering red dunes. Well, the live ones anyway.

It obviously bends the knee to the bullet, but it stands tall against the desert heat, drought, toxic plants, and even un-necessary violence. On its own turf, it’s a force to be friendly with, because:

Its dusky lilac pelt, white butterfly mask and monochrome trimmings not only look cool but reflect both light and heat, which is handy in Kalahari temperatures of 46°C(115°F). It can give as good as it gets as well, radiating excess heat back out again, and even bumping its body temperature from 37.5 to 45°C (99.5 to 113°F) to stop the desert snatching its moisture. Speaking of which:

It can survive long periods without water….

Smelling new rain from far away and being an all-terrain antelope isn’t enough in a drought. By chomping fresh vegetation, or even toxic evergreen Euphorbia damarana, and digging up to a metre (3 feet) for roots or tubers, the gemsbok can cobble together its daily water needs from the environment. But it’s not all “take take take” for this sandy nomad.

It helps other desert dwellers…

Its, er, liquid leavings are so concentrated they can cement sand together. This is great news for gerbils, who use these clumps to build more escape burrows in the delicate Namib dunes. As for food, the gemsbok’s nonchalant nibbling on dried plants can expose younger shoots for other grazers like springbok. Even humans aren’t left out: according to Nisa, a !Kung woman of the Botswana Kalahari:

“Certain animals—gemsbok, eland, and giraffe—have trance songs named after them, songs long ago given by God….”

“My father had the power to cure people…with gemsbok-song trance medicine”.

It’s pretty inclusive amongst its own kind as well:

It will (probably) let others in its group…

Despite the reduced resources and dating pool, a dominant male will let other males into the herd provided they’re not too sassy and give him his due. While he brings up the rear and checks for any stragglers, the dominant female will lead the group, which can number a few hundred. Both sexes have horns, and each one tends to stand a horn’s-length from its neighbour, because:

Taking a leaf out of the kudu’s book, it would rather stand sideways and blag leadership with size than fight, but even then, it’s all about the headbutts – goring is spared for the lions, cheetahs and hyenas, not gentlemanly combat. And when the combat is considerably less even:

No matter how much it’s hunted, it keeps coming back…

Well not literally – it’s because it’s bred as trophy game. In fact 45% of the Namibian population lives on private farmland, and breeding it for sport shooting is one of the reasons its numbers have clambered back up after somewhat less regimented human activities in the 19th and 20th centuries.

Still, when both your environment and all the predators are out to get you, it’s impressive staying as non-violent as possible, not to mention surviving against odds that would wipe out most other large mammals. And, inadvertently or not, helping other animals in your wake.

If that doesn’t make the gemsbok a benevolent spirit of the sands, what does?

Where? Namibia, Botswana, South Africa, and parts of Zimbabwe. Also introduced as a game animal in the south-west US. It’s just as happy tottering about in savannah as sandy deserts and salt pans.

Probable motto: Feel free to worship me without the guns.

Ironically, captive breeding due to the demand for hunting trophies has helped increase and stabilise the gemsbok’s population. And, thanks to private reserves, there are no conservation concerns at the moment, nor are there likely to be in the near future.

Shostak, Marjorie. 1981. Nisa: the life and words of a !Kung woman. Routledge.

One thought on “Why the Gemsbok is a Desert Deity”