By unhappy coincidence, one of the world’s deadliest snakes is also the fastest.

Clocking up to 19kph (12mph), it’s uncomfortably, some would say pants-soilingly close, to the average human sprint of 24kph (15 mph), and if you’re also too slow with the antivenom, you’re looking at a 100% fatality rate from a single bite. Too bad it usually bites more than once.

The black mamba probably isn’t impressed either, because its main concern is hunting birds, mice and other small mammals. For it to sweep after you with deadly intent, it must feel threatened or trodden on, and is more likely to use its speed in the opposite direction.

Nonetheless, it’s known for its aggressive self-defence and rapid-fire strikes. So, you’re probably dying to know (no pun intended), what happens next.

Probably the worst cocktail ever.

Thanks to its party favour of cardio- and neurotoxins, the black mamba’s bite has both creepy and fatal effects like drifting eyes (ophthalmoplegia), excessive drooling, kidney failure and paralysis. Since 10-15mg of venom is fatal, and the black mamba can slam up to 400 in one bite, you could have less than an hour to get some antivenom in you. On the other hand, some of the mambalgins have pain-killing properties without the risky side effects of other drugs, and could one day replace morphine. Not straight from the snake’s mouth, obviously. Speaking of which:

What’s in a name?

The black mamba isn’t black. It looks like the latest in snake design, with sleek grey-olive scales and a pale underside, and rather than the usual pink or white, the inside of its mouth is a cool black and blue. Or a gateway to the abyss, which it flashes to ward off enemies. But who might they be?

“At my local Afrikaans school… I recall a teacher stating that if you wanted to kill a snake […] you needed to stand on its head, grab its tail, swing it round your head and smack it hard against a tree”.

Fortunately, my relative never tested this theory as a child in 1980s South Africa, but they did see the stoning and subsequent torching of a black mamba that had slithered up to their driveway, and another poured, hissing and flaring its hood, out a local snake charmer’s sack. Their reaction? “I turned on my heels and legged it”. 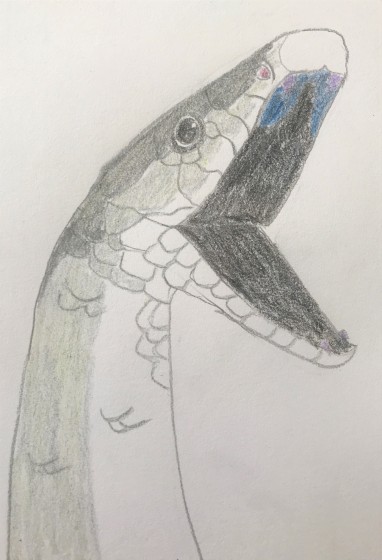 This looks bad because it was safer to draw it from far away.

So the black mamba’s reputation isn’t exactly stellar, and as Thea Litschka-Koen and her husband found in Swaziland, the usual response to a mamba in your garden or bathroom is to send police in to shoot it. Fortunately, they have a more eco-friendly way: (extremely) careful capture and relocation. And thanks to the first ever mamba radio-tracking, it seems to be working.

Home is where the heart is

While admittedly only a handful, the mambas looped to safety by the couple didn’t bother returning to their previous home. Give them a nice tree, scrubland, or savannah flush with prey and zero humans, and they’re happy. What matters more to them is the ambiance: the black mamba needs to maintain a body temperature of 30°C (86°F), hence basking up a tree or cooling off in people’s bathrooms.

To keep its temperature healthy, its black-blue mouth harmlessly closed, and most importantly its venom outside of us, we should just let it get on with the business of being a kick-ass reptile. We’re nowhere near cool enough to be in its presence.

What? Africa’s longest venomous snake and one of the deadliest in the world, named after its black-blue inner mouth.

Where? Across sub-Saharan Africa, near forests, savannah, shrubland and cliffs. It’s as much at home up a tree as in a hole in the ground.

Endangered? Nope, Least Concern, and isn’t thought to be in decline.

Probable motto: I’ll keep you away. By fair means or foul.

They sound terrifying. Awesome! Do they need my help at all?

Habitat loss is bringing the black mamba and humans closer together in the worst possible way, but it’s not considered endangered or in decline, so there are no conservation campaigns at the moment.

“Two Black Mambas Entangled in a Battle are Captured on Camera in South Africa“. 2017. National Geographic.

2 thoughts on “The Black Mamba: Nature’s “Do Not Disturb” Sign”