Fellow creatures of the Miocene.

It is with great regret I announce my abdication from the role of “largest carnivorous land mammal”.

No doubt this will come as a surprise and a relief to some of you, not least the feline and canine carnivorans giggling at the back. However, my reasons are manifold.

It may be true that I could outweigh my largest and un-related successor, the “polar bear”, or crush the skull of a future “king of the beasts” between my colossal jaws. Yet as I have discovered, size both is, and isn’t, the be all and end all. 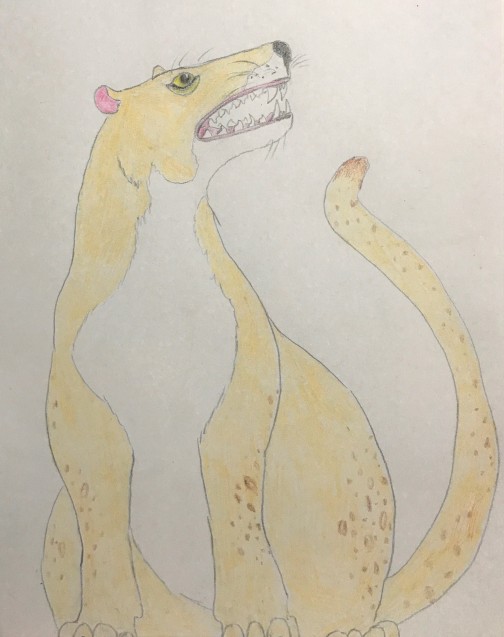 Appearances are not all they seem, either.

I would not be worthy of my “hypercarnivore” name if my diet were less than 70% meat. But as you can see today, this is increasingly hard to come by.

There was a time when a crowd like yours would be full of be-tusked proboscideans and plump, water-loving anthracotheres, but I see only one or two of you here. The warming weather has caused many to move on, or to disappear. And as for you, you feline and canine carnivorans, you may take great pleasure in jostling my hard-won prey from me, but know this – you could never have caught it alone as I did.

Why, you may ask, do I not simply target the smaller, quicker beasts for my fill of meat. I have certainly done so, but as my limbs and flexed feet will attest, I am in my prime when ambushing an unknowing quarry, not charging across the savannah in the heat. I pride myself on hunting with grace and poise, and I am seldom able to do this now.

What will be my fate? I will gradually cede my throne to others who can master the smaller, faster prey, and let my bones sleep in the Earth for a few million years. I will then be found, and for a brief flash of indignity, tossed aside in favour of primate bones and into a museum drawer with the hyena rabble. Then I will be rediscovered, enthralling those who find me with my enormous size, three pairs of slicing teeth and bone-crushing molars, and take my place on my throne once more.

Do not grieve for me, or see this as a failure. My kind, the hyaenodonts, spread themselves far and wide for 15 million years, and I am from a dynasty reaching back another 56 million. My reign may be coming to its end, but it will resonate for generations to come.

Meaning: “Big lion from Africa”, despite not being a lion! (Simbakubwa kutokaafrika)

What? Massive prehistoric carnivorous mammal the size of a polar bear

Where? Kenya, 23 million years ago during the Miocene period

Probable motto: Perhaps I outgrew everything.

Dunham, Will. 2019. “Out of a drawer and into your nightmares comes a vicious ancient beast“. Reuters.

Zuckerman, Catherine. 2019. “This new species of ancient carnivore was bigger than a polar bear“. National Geographic.

2 thoughts on “The Abdication of Simbakubwa”