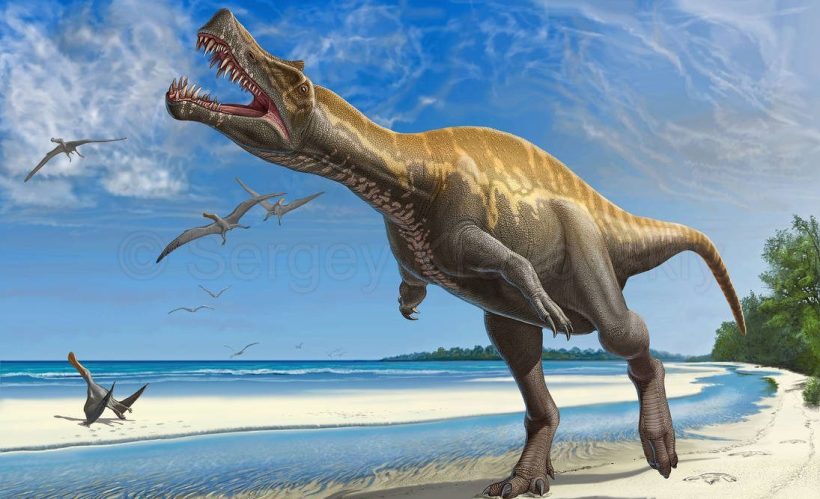 Back when South America and Africa were suggestively nudging each other, the animal now known as Irritator challengeri was snapping up fish in its toothy snout. Something happened at its lush lagoon home, and it (obviously) ended up dead, its head separated from its body and buried in sediment. Being cut down in your prime is enough to annoy anyone, let alone decay and fossilisation over 112 million years, but this wasn’t its only headache.

Dinosaur fossils can go for hundreds of thousands of dollars, or more than a million in the case of T-Rex relative Tarbosaurus. And as a carnivore can smell meat, the less reputable and/or desperate can smell money, so Irritator‘s skull was unceremoniously yanked out of the ground from who knows where exactly (probably the Romualdo Member of Brazil’s Santana Foundation), prettied up, and sent on its merry way to an enthusiastic buyer. Unfortunately, “prettied up” turned out to be as accurate as “enthusiastic” when the truth came out.

At first glance, it looked like the head of a winged pterosaur with a fancy crest. So not a dinosaur, but still awesome-looking, and with a fully formed skull. At least until the Stuttgart State Museum of the Natural Sciences took a closer look.

The good news, according to David Martill et al., was that it was in fact a dinosaur and the first maniraptoran (like Velociraptor) with a unique and prominent crest. The bad news, following a CAT scan, was that it wasn’t a complete specimen after all. More a Frankenstein concoction of stuff lying around a garage.

What a car crash!

The end of its snout was missing with another skull part slapped on top; extra bits of plaster had been stuck on to hide it; the funky crest didn’t actually belong to it; and someone had tried to fix a large crack with, unbelievably, some car body filler.

This rage-inducing discovery gave birth to its name Irritator, and to cap off its horrendous nightmare head, the left-side was badly damaged by whoever threw the remains together, while the right side was mostly pristine. So a shape-changing, deformed, two-faced predator all in one! 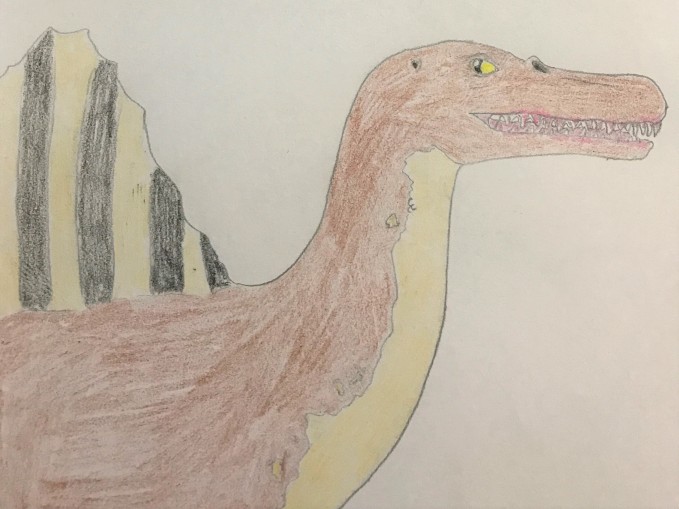 This is its “best” side, apparently. I gave it a fin to make up for it.

Ending with a smile

The superhero in this story, on the other hand, was Diane Scott, who painstakingly re-prepared the skull and rooted out all the nonsense.  It was Andrew Kellner who pointed Irritator towards the family of huge apex predator Spinosaurus, and in 2002, Hans Dieter-Sues et al. re-examined the “real” skull.

It’s still the most complete one we have from the terrifying spinosaurids, and some features are similar to crocodiles. For instance, as well as the long snout, it had high nostrils and a separate palate so it could breathe while feeding underwater. Two years later, its tooth marks were found on a nearby pterosaur skeleton, so it probably didn’t stick to fish either. That or it was pre-emptive revenge for being mistaken for one.

So it was a large croc-like dinosaur whose head was mangled, humiliatingly misidentified, blamed via naming ceremony and resented by almost everyone who treated it. People have turned to evil for less.

Meaning: I’ll leave you to guess this one, but second name challengeri is after Professor Challenger of Arthur Conan Doyle’s The Lost World

What? Misidentified carnivorous dinosaur with a long snout and (possible) fin, like Spinosaurus

Probable motto: Sure, you broke my face, but imagine what I could have done to yours!