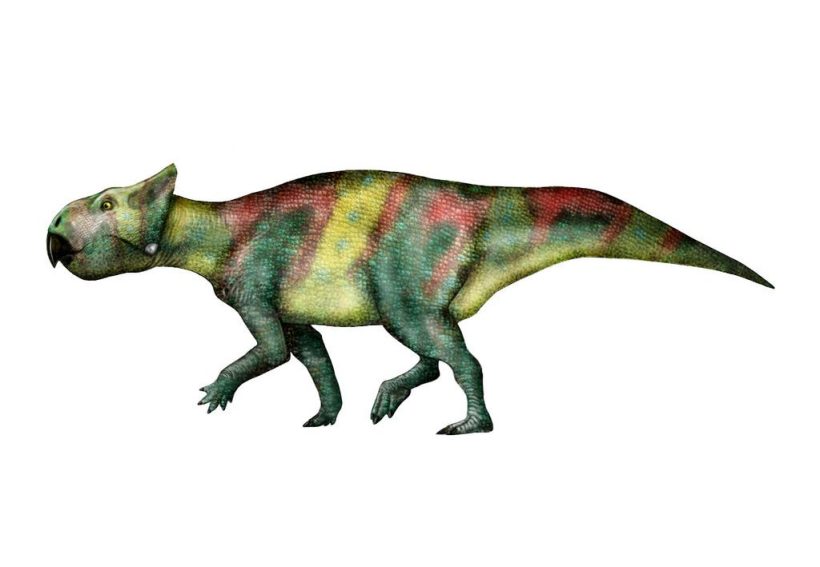 This little dino has a big name on its shoulders. Which is impressive since it doesn’t even have any.

Well it did in real life, obviously, but this mini hornless Triceratops is only known from a single bone. It staggers me that palaeontologists can tell so much from one fragment, but the one we found from Unesco happens to be a tell-tale feature of its family: the jaw. Well they can’t all have massive teeth or bull-horns, and spare a thought for Unesco’s ego, because it must have taken a battering.

Scampering about in Cretaceous Alaska 84-70 million years ago, it would have lived in the shadow of larger, less hornless dinosaurs like the duck-billed, pompadour-crested Lambeosaurus, or its more elaborate cousin Styracosaurus, whose outward facing spikes topped its huge skull like a rising and exploding sun.

At most, Unesco had a sharp beak and modest head frill, and while at 1-2 metres (3-6.5 feet) long it was bigger than the other leptoceratopsid named at the same time, Gryphoceratops, the latter is both North America’s earliest recorded horned dinosaur, and named after a kick-ass mythological lion-eagle. Still, it wasn’t the only one who could lord it over its dinner.

Chin up, little one!

As well as plants, Unesco may well have chomped on small amphibians and reptiles using its hatchet-like beak and rounded teeth. Its teeth are the most rounded of its family, in fact, and it also had a protruding “chin”. These are the main reasons it was crowned as a new species by Ryan et al in 2011, despite being handwaved away as yet another Leptoceratops in 1998. You can probably guess why it was named after UNESCO, but Alaska’s Dinosaur Provincial Park, where it was found in 1995, is a world heritage site for a reason. It turns out Unescoceratops was around during a dinosaur boom, and not the apocalyptic type. 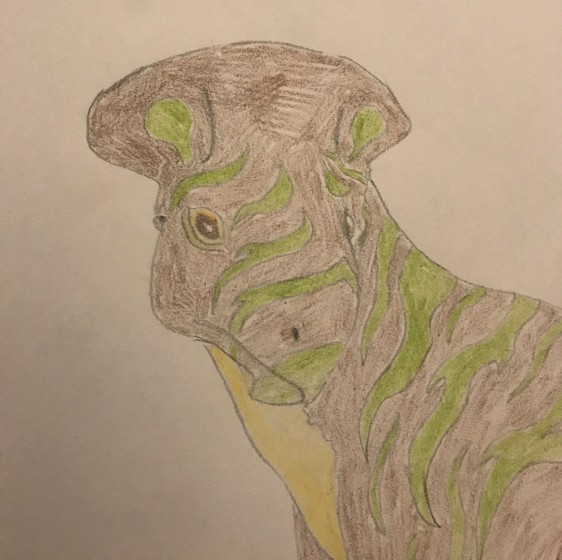 It still looks like something bad happened to it though.

Up to 44 different species have been found there alone, all from pretty much the same part of the Cretaceous, and some palaeontologists think the in-utero Rocky Mountains and an enormous inland sea had something to do with it. Unesco’s home was likely lush and warm thanks to the Western Interior Seaway splitting the continent in two, and when you throw mountains into the mix as well, your habitat and migration options are a tad limited. As we’ve seen before, restriction inspires creativity, so in a short space of time, a large number of new dinosaurs are thought to have evolved.

Fossils of small dino species are rare because they get scattered and eaten, so Unesco is important in evolutionary terms too. The second half of its name, koppelhusae, is after Eva B. Koppelhus, who as a palynologist studying tiny spores and organisms, also knows how vital the small things can be.

It might help complete the puzzle of how Triceratops and co. evolved, or remain its own outlier, forever spoken of in hushed tones by amphibians and reptiles alike. Either way, it’s not a bad legacy to leave behind, even without the honorary name from the mammals that later seized the Earth. The question is, would it have been pleased or insulted?

What? Small (mostly!) plant-eating dinosaur like a mini, hornless Triceratops

Where? Alberta, Canada, about 84-70 million years ago in the Cretaceous Period

Probable motto: Who needs big horns when you have a big name?

Longrich, Nick. 2015. “How I found a small, weird-looking horned dinosaur from eastern USA“. The Conversation.