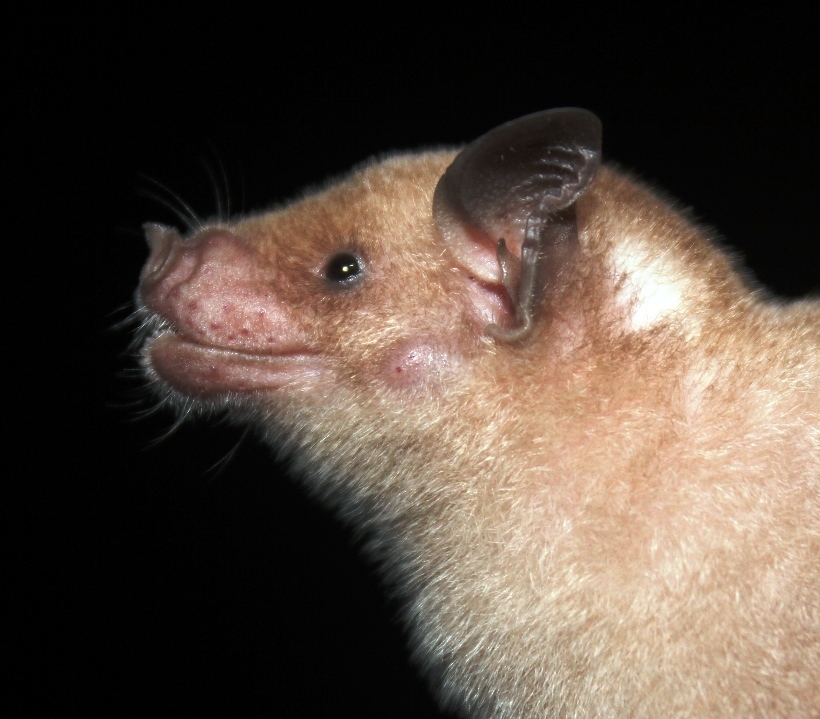 Although it flits into daylight to slurp nectar and overripe fruit, the Jamaican flower bat lives deep inside caves in large roosts, where its mere presence raises the temperature by 5°C (41°F), the most rain it sees is larvae tumbling from the ceiling, and if it were to tumble itself, it would likely land in a sea of gnashing  insects or pools of fetid guano soup. At least it used to, in the busy St. Clair Cave. While it may have decamped into less terrifying dwellings, it seems to have lost most of its species somewhere in transit.

Once found flapping in many a Jamaican cavern, there are just 250 bats left, and only in Stony Hill Cave, which swapped its fetid pools and carnivorous carpets for a cockroach invasion. I’ll leave you to mull over which is worse.

Stony Hill Cave bats, taken in 2011. With thanks to the Jamaican Cave Organisation!

The Jamaican flower bat was already a fleeting flitter back in 1952, and when it disappeared from St. Clair in 2005, Mcfarlane considered it extinct. It’s happy to rub shoulders with other species like the buffy flower bat, but they and others are still found in the caves the Jamaican version used to live in, so it’s a mystery as to why it’s dropped off a ledge. A feral cat population near St. Clair might explain it, as well as human disturbance from guano collection – from which cockroaches have piggy-backed inside – but it’s as unpleasantly mysterious as an aforementioned fetid pool.  Being misidentified doesn’t help either.

Again in contrast to its dark and nightmarish home, the Jamaican flower bat has short, silky blonde fur that’s almost white on its chest and belly, pink skin on the back of its arms, and apart from its lack of “nose-leaf”, it looks almost identical to its roost mate, the aforementioned buffy flower bat (Erophylla sezekorni). False sightings are therefore rife, so don’t be surprised if the above featured image changes at some point!

This one won’t though…for better or worse!

This obviously doesn’t help track its numbers, and we don’t have any in captivity any more, either.

A female that was caught very sadly died after a few days. During that time, we did learn that she was sensitive to light, hiding her face in the corner of her cage, and as well as canned nectar, she was partial to bananas, mangoes and papayas. This makes sense because according to Novick and Leen, the Jamaican flower bat can’t bite through hard fruit, hence munching on the overripe stuff during the wet season. Little else is known about it, although it probably breeds twice a year in January and June. (And yes, like the Japanese marten, this involved testicle measuring. The things we do for science.)

For such a small and social animal, it seems to be running out of places to call home, and unless we uncover what’s causing it, winter may come sooner than usual for this little flower.

What? Small bat that eats nectar and fruit

Where? Jamaica, possibly only Stony Hill Cave in Portland

Endangered? Yes, Critically, currently only known from one cave system in Jamaica

Probable motto: I’d have more luck finding a home if I did look for a cave with flowers in it

Yes, but we’re not entirely sure why they’re disappearing, so how to help is as clear as a cave. Human disturbance and possibly feral cats could be the problem, but they need further study before we can pin this down. How can we study them? Try to find more of them!

Bat Conservation International has specific regional campaigns, one of which includes Jamaica and our flowery friend.

Caving News. 2011. “Visiting the roost of the Jamaican Flower Bat“.

The National Environment and Planning Agency for The Nature Conservancy. 2007. “A Report on the Survey of the Cockpit Country for the Bat Species, Phyllonycteris aphylla (Jamaican Flower Bat)“.