When your watery home has a sharply rising ocean floor, brutal westerly winds, errant icebergs and massive waves, you don’t stray too far from the shore. The sight of an imperial shag, or cormorant, is therefore great for mariners crossing the terrifying seas at South America’s tip, a trip Darwin himself almost didn’t survive.

But it’s pretty shrug-worthy to an imperial shag, and depending on the sub-species, it makes its home here, or on islands off Australia and New Zealand, or the northernmost parts of Antarctica. It’s part of the “blue-eyed shag complex”, which can be 8-13 different races depending on who you ask. Regardless, they all share a bright blue eye ring, a yellow-orange bill-bump, a white belly and blue-black feathers. Oh, and a sex crest.

In the run-up to breeding season, the imperial shag has a punky head fringe, and this recedes once the party’s over.

It definitely chose the best style for ravaging seas and brutal winds.

And party it certainly is, because it can form thousand-strong breeding colonies. Courtship involves the male gargling and some mutual neck and face nibbling, and while the female may lay 3-5 eggs, the pair will only bother looking after two at most.

Egg insurance is the way to go, especially as, unlike other Antarctic birds, imperial shags aren’t born with a protective down, so without cuddles they’ll feel the icy ocean winds at full blast. That’s why it’s important to build a warm and sturdy nest of feathers, guano and shells, and if you can’t find any, steal your neighbours’. At a glance, all the adults seem interchangeable, but the ladies and chaps do behave differently.

To begin with, while the females tend to hiss, the males sound like an old oak chest creaking open. When choosing which shags to fit with video cameras in their awesome 2015 study, Gómez-Laich et al. found that the females hunted just after dawn, and the males just past noon. Naturally they chose to film the males (hey, researchers need sleep too! Also, dark), but in their 2011 study, females seemed to spend more time foraging underwater and diving. Either way, the imperial shag can hold its breath for up to 4 minutes, dive up to 100m (328ft), and uses a “prey-flush” method to scare small fish out of hiding, because underwater visibility is pretty rubbish, even if you do bob your head. But what’s eating the imperial shag?

The usual suspects are kelp gulls, black vultures, leopard seals, and even the odd hairy armadillo! And although it’s listed as Least Concern, it’s affected by over-fishing and net entanglement. There’s also evidence a small number abandoned their breeding colony because of tourist boats. It gets down and dirty in large numbers, but that doesn’t mean it wants you to watch, people! 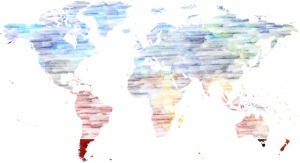 Where? Southern tip of South America, islands off Australia and New Zealand, and northern tip of Antarctica

Endangered? Currently Least Concern, although over-fishing, nets, and tourist disturbance are a bother.

Probable motto: I blow hot and cold between continents.

Living in some of the most uninhabitable coastal areas helps somewhat, but the imperial shag can still feel the effects of breeding colony disturbance, over-fishing and net entanglement. It’s Least Concern at the moment, but its Antarctic home could always use some love:

and there are general wildlife conservation projects in Patagonia with the

Featured image credit: “Imperial shag on its nest” by JeremyRichards

One thought on “Imperial Shag Loves the End of the World”