This fluffy little tree-dweller can change its diet, its coat, and even its due date when needed, so it’s no surprise it’s a shapeshifter in Japanese mythology. It’s so good, in fact, that it can cause thunderstorms and horrendous house fires while convincingly blaming something else. Then again, the weather can change its behaviour too.

For instance, after doing the marten-mambo, a female can keep the embryos for almost a year if conditions or food supplies are wanting. In the summer or in warmer forests, scarfing down fruit and insects is preferable, whereas in winter or at chillier, higher altitudes, small birds and mammals take up most of the menu. The Japanese marten even has a seasonal coat, but as Funakoshi et al. found in 2017, it’s not due to grilling or chilling. 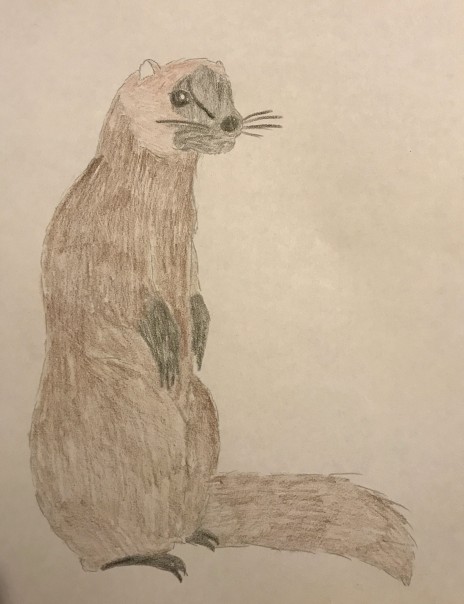 In the summer months, a black head and limbs and a brown body are all the rage, while a pale face and a yellowish (ki-ten) or light brown (susu-ten) coat is the way to go in winter. Despite the different end of year outfits, there’s no genetic reason for this, and it boils down to sunlight exposure and local camouflage: it’s no good being bright when there’s barely any snow around. Of course, having a lovely thick coat of many colours can sometimes catch the wrong kind of attention.

While currently “Least Concern”, the Japanese marten is threatened by feral dogs, logging, possible hybridisation with the larger Japanese sable (in case it fancies an extra bit of “rough”), and those who think its coat looks better on them. Fortunately, it has its own private sanctuary on Tsushima Island, and the martens here are genetically diverse, apparently having romped around here since the Pleistocene age up to 2 million years ago.

Elsewhere in Japan and Korea it’s considered fair game and a possible pest, but its dung does help seed dispersal, and gives conservationists a less stressful way of studying it than, say, capturing the males to measure their testicles. (Yes, this actually happened, and in more than one study.) It can be tricky telling it apart from its similar neighbourhood relatives, and people in ancient times had it just as hard.

Known as a trickster as well as a shape-shifter, in Sekien’s Yokai Encyclopaedia of Japanese legends, the marten could stand on its friends’ shoulders to form a pillar of house-wrecking fire, but its name was written with the “weasel” character instead. The Raiju, or “thunder beasts” of yore have also been described as weasel-like, riding lightning, shrieking, tearing up tree trunks and generally being a terrifying nuisance. Then again they’ve also been pictured as monkeys or winged, so there’s reasonable doubt. Perhaps the only real incriminating evidence comes from the Ainu people, who danced wearing marten-skin accessories when praying specifically for bad weather.

Either way, the marten has weathered many a storm thanks to its opportunistic nature and sensible wardrobe. And being several shades of cute probably doesn’t hurt either.

What? Tree-dwelling, weasel-like omnivore whose fur changes colour in winter

Endangered? Currently Least Concern, and one of its habitats on Tsushima Island is protected.

Probable motto: It wasn’t me, it was a weasel.

Despite their fatal arguments with vehicles, feral dogs, logging and furriers, Japanese martens are protected on Tsushima Island and generally widespread.

There are no specific conservation drives (and the centre on Tsushima Island doesn’t seem to accept donations on the English language site), but the Japan Wildlife Conservation Society throws some love to wildlife across the Land of the Rising Sun.

Tatara, Masaya. 1993. “Notes on the breeding ecology and behavior of Japanese martens on Tsushima Islands, Japan“. Journal of the Mammalogical Society of Japan 19(1):67-74.