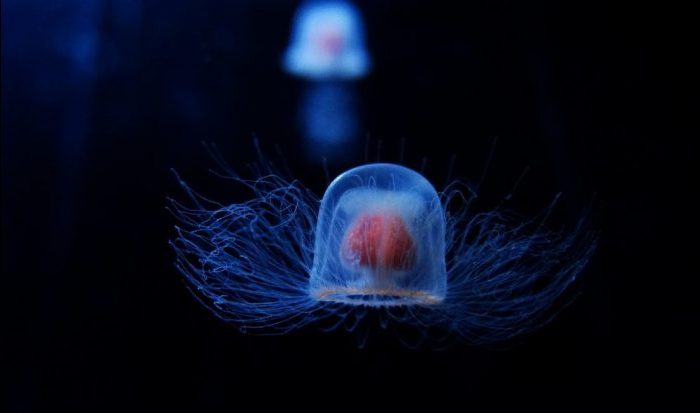 Another potential supervillain either squandering its power or slowly building its empire. But unlike the others, it has its own karaoke mascot. I’ll get to that craziness later, but first, let’s talk about the animal that can live forever.

It’s neither jelly nor a fish, but the immortal jellyfish is technically immortal. It can still die in the bellies of predators, but if injured or stressed, using “transdifferentiation”, it can revert back to an earlier life stage and start again. Indefinitely. For this to make sense to we mammals, we need to look at its life cycle.

Like most jellyfish, immortal jellyfish begin life as planula, essentially larvae. If one finds a good surface, it will transform into a polyp colony and take on two jobs: sending out identical polyps, and tiny ephyrae – jellyfish – that become sexually mature medusae that can then create more planula, even without a lucky partner.

Once a jellyfish came of age, it was thought returning to their innocent youth was impossible. Then a discovery by two Salento University students changed all that.

Christian Sommer and Giorgio Bavestrello were studying a group of the jellyfish –thought to be the other species T. nutricula – and basically forgot to check on them for a few days. Instead of a small mass of transparent corpses, they found polyps, and so discovered that the immortal jellyfish can age backwards by repurposing its cells and switching certain genes on and off. While it’s likely a dead-end for human anti-ageing treatment, its gene-fiddling is of some interest to cancer research. So a happy ending for the students, and for the neglected jellyfish. Sort of. It’s not so happy for the rest of the ocean though.

Immortal jellyfish are the size of a small human fingernail – so put any Cthulu-esque boat wrestling out of your mind – but they eat plankton, small molluscs and fish eggs. If there are no predators to cut them down, they can cause serious problems in certain ecosystems. And they’ve been turning up everywhere, because when you can hide out as a polyp, you can ride out a multitude of bad conditions, such as being attached to the hull of a ship or in ballast water. Hurling out endless clones of yourself probably doesn’t hurt either.

Hey, if nature can’t be bothered to colour it in properly neither can I.

Having said this, the “clones” don’t always stay identical. For once, the tropics don’t have a monopoly on creepiness: immortal jellyfish in warmer waters tend to have about 9 tentacles, whereas those in temperate zones can have up to 90. That could make things complicated for one of their biggest admirers, scientist Shin Kubota.

As well as studying them, Kubota also calls himself the “Immortal Jellyfish Man”, performing karaoke and his own songs about them while dressed as one. It may sound like fun, but he may be the only one spared when their translucent clone army finally conquers the globe and begins its grim march on to land in search of human flesh.

But until that fateful day, enjoy.

What? A jellyfish that technically lives forever by reverting back to a “baby” if times are tough

Where? Oceans pretty much worldwide

Endangered? No, quite the opposite, it seems to be spawning itself all over the ocean!

Probable motto: [Best not to ask. If they all spoke at once it would deafen the world.]

They sound interesting. Do they need my help at all?

Australian Academy of Science. No date. “The animals that can live forever“. Science.org.au.

Barras, Colin. 2015. “The animals and plants that can live forever“. BBC Earth.

Langley, Liz. 2018. “How jellyfish rule the seas without a brain“. National Geographic.