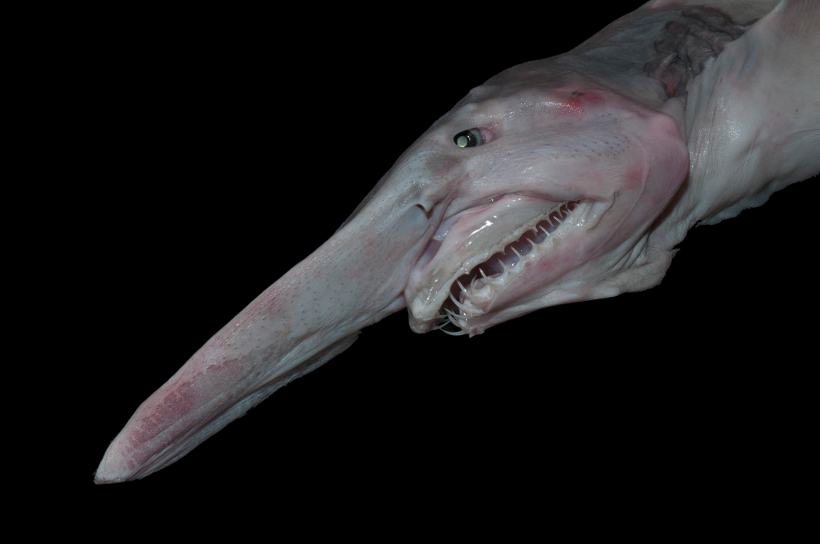 My last two posts have had a bit too much sexy talk, so here’s the goblin shark to put an end to all that. Possibly forever.

But we shouldn’t be too hard on it, because it’s mainly a product of its environment. It’s the last of its family (Mitsukurinidae), it lives in pitch darkness, with no food and other predators on the hunt, and its muscles are too weak to boost through undersea canyons after its own prey or to avoid becoming someone else’s. In this situation, wouldn’t you rely on stealth and ambush whatever prey swam past?

This in part explains its Pinocchio snout. Eyes are pretty much useless down in the bathypelagic or “midnight” zone of the ocean, up to 1300m (4,265 feet) down, and in any case, one of the top tools in a shark’s hunting kit are the ampullae of Lorenzini. These may sound like some kind of fantasy collectible, but they’re what they use to detect electrical impulses in the water. And the underside of the goblin shark’s snout is covered in their openings.

If something delicious like a bony fish, crustacean or squid happens to ripple past, the goblin shark will sense it, and then, faster than any other shark, extend a set of nightmare jaws almost as far out as its nose to grab them. The thin curved teeth lining said jaws are for spearing, not cutting, so if the job’s a good’un, the goblin shark will swallow its prey whole. The jaws then retract, leaving it with the silly-looking nasal appendage with a hideously dark secret.

The length of its jaws has been such a shock, in fact – up to 10% of its body length – that some specimens were classified as different species depending on how far they were protruding, when all the time they just tucked snugly away.

Just imagine how much cake you could swallow.

There’s not much else we know about this mysterious fish, because it’s very elusive. We’re guessing it gives birth to live young like other similar species, and that the larger specimens, up to 5.5m (18ft) long with “claspers” under the tails are the males. The smallest known one was just 82cm (2.6ft) long, and possibly a baby. It’s mainly been found in the occasional deep sea fishing net – not enough to threaten it, fortunately – and those that were still wriggling were sensibly thrown back. Speaking of throw-backs, it’s quite a primitive beast.

The goblin shark’s family dates back 125 million years to the Cretaceous period, when dinosaurs were still roaming the shore and giant reptiles ruled the air and seas, and it hasn’t massively evolved since then. The term “living fossil” has even been bandied about, and again could explain its shocking appearance and alien-esque jaws. It deserves kudos for having survived so long, especially in such a hostile environment, and I think naming it after a goblin is a little unfair. What about another fantasy creature that’s pale, rare, and has a “magical horn”? Hmm, maybe a bit of a stretch, but still not as far as its jaws. 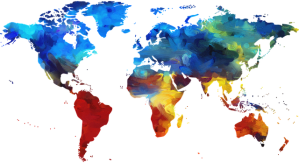 What? Deep-sea shark with a Pinocchio nose and extendable jaws

Where? Worldwide, at depths of about 200 m / 656 ft to 1300 m / 4,265 ft, from the mesopelagic (twilight) to bathypelagic (midnight) zones. Most specimens have been caught around Japan, although one or two have surfaced in North America lately

Endangered? Currently Least Concern, due to its widespread range, and it’s not often caught in deep sea nets.

Probable motto: Think my nose is funny? Take a closer look and it might surprise you.

They look…interesting. Do they need my help at all?

Not specifically, as they’re left in relative peace to do their sharky thing. However, their ocean home, as well as their sharky siblings, could always do with some extra love:

“The goblin shark: a rare glimpse of something truly hideous“. 2014. The Guardian.